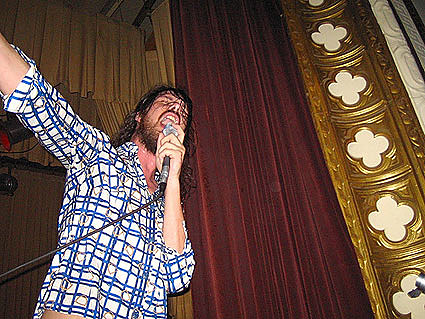 According to Ticketmaster, the only scheduled concert remaining at Clear Channel's new "top rock club" is the Living End show tomorrow night (July 8, 2006). The "Avalon shows" MySpace page says the same thing. The October Vitalic show is now at Hiro Ballroom, and Miss Kittin had a September 16th date at Avalon, but her tour was cancelled.

Rumors have started that the club is for sale and/or closing. Avalon's website just says "new website coming soon."

Clear Channel started doing shows at Avalon at the beginning of 2006. In that short amount of time: CSS/Diplo was cancelled for ticket sales, Teddy Thompson & Glenn Kotche were raided, and the club was shut down causing the cancellation of an Orb show (and maybe others).

The above picture is from the The Liars show @ Warsaw in Brooklyn on June 24th because I couldn't really find a picture of the show they played at Avalon on June 26th.