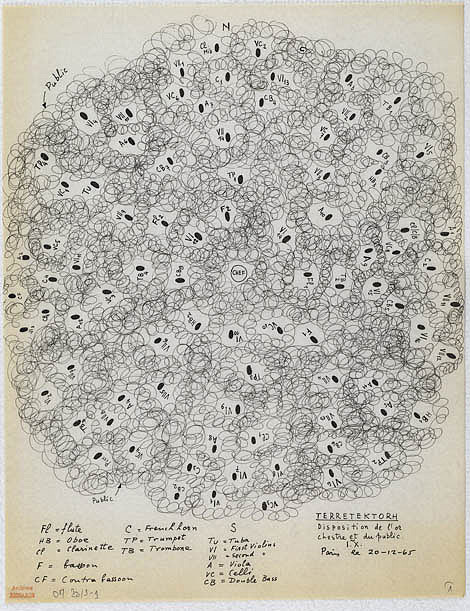 Iannis Xenakis: Composer, Architect, Visionary will explore the fundamental role of drawing in the work of Greek avant-garde composer Iannis Xenakis (1922-2001). A leading figure in twentieth century music, Xenakis was trained as a civil engineer, then became an architect and developed revolutionary designs while working with Le Corbusier. Comprised of nearly 100 documents created between 1953 and 1984, this will be the first North American exhibition dedicated to Xenakis's original works on paper. Included will be rarely-seen hand-rendered scores, architectural drawings, conceptual renderings, pre-compositional sketches, and graphic scores. Iannis Xenakis: Composer, Architect, Visionary is co-curated by Xenakis scholar Sharon Kanach and critic Carey Lovelace and will travel to the Canadian Centre for Architecture (June 17 - October 17, 2010) and the Museum of Contemporary Art, Los Angeles (November 7, 2010 - February 13, 2011).

The show is currently at the NYC Drawing Center through April 8th. That picture above is a diagram for an 88-member orchestra scattered among its audience (aka the squiggly lines). More works on display are below.

There are also concerts and events to go along with exhibit. JACK Quartet, who put out a CD and DVD of Xenakis's string quartets last May, already played in conjunction with showing earlier this month (videos from their DVD are below). JACK do have shows coming up, but those are mainly comprised of new material; they play March 3rd at Merkin Concert Hall. Their upcoming schedule also includes the Look & Listen Festival 2010 (coming up May 7th-9th); So Percussion are on the bill for that too, playing music by Morton Feldman, John Cage, and their own Jason Treuting (So Percussion are also at Carnegie Hall this March). Advance tickets for Look & Listen are available by phone.

If you'd like to learn more about the Xenakis show, co-curators Sharon Kanach and Carey Lovelace, who both worked with the composer, discussed the show with Art International Radio - that's streaming.

More drawings, videos, and Drawing Center info and events are below... 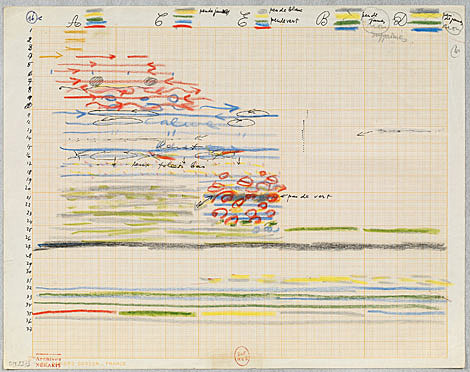 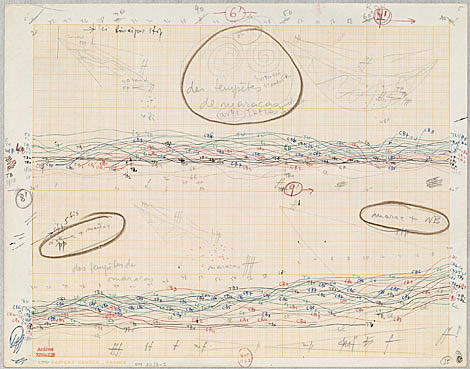 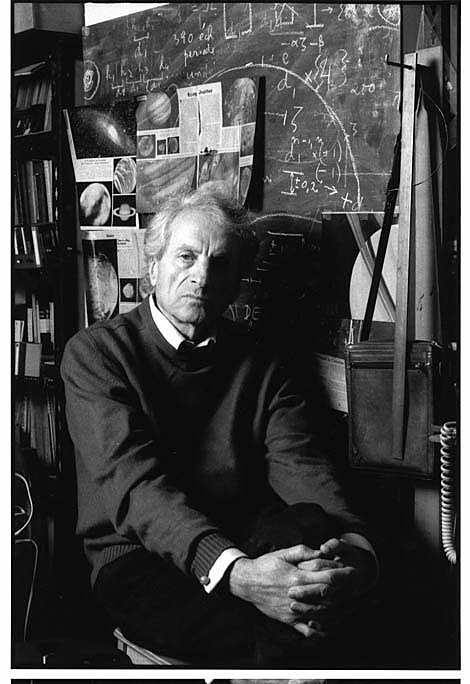 Xenakis: Past, Present, Future events
Daniel Teige performs Iannis Xenakis February 13, 20, 27; 2-8pm
Persepolis, Polytope de Cluny, Hibiki Hana Ma, Légende d'Eer, Bohor
Diapason Gallery
Diapason Gallery will feature an overview of Xenakis's tape pieces in a multichannel
environment. On February 6th, 2010, German sound artist Daniel Teige will
perform an extended concert featuring a selection of these works adapted to the
architecture and acoustics of Diapason Gallery. The result of this concert will be
recorded and played as a sound installation in the gallery during the entire month of
February (2/13, 2/20 & 2/27).

IX: The Percussion Music - Concert and Panel Discussion
Frederick Loewe Theatre - NYU
Sunday February 21, 3:00 PM
A panel discussion with Q&A, followed by a performance of Xenakis compositions, Rebonds A, Psappha, Okho, Persephassa, and Rebonds B, will feature the NYU Percussion Ensemble, Jonathan Haas Conductor/Director. The panel will include the concert's performers and will be moderated by Jan Williams.

French Transmission
Elebash Hall at the Graduate Center of City University of New York
Tuesday March 16, 7:00 PM
The American debut performance of the critically acclaimed Montreal-based ensemble Transmission, will feature works by Xenakis, Vivier, Aperghis, Murail, Boulez. A lecture-presentation on "Xenakis in Canada" by James Harley, author of Xenakis: His Life in Music will precede the concert. This evening is co-sponsored by the Xenakis Project of the Americas, EMF, and CALQ (Conseil des arts et lettres du Québec).