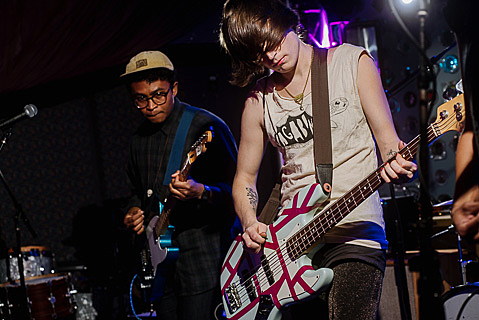 Brooklyn punks Aye Nako are following their impressive 2013 debut LP, Unleash Yourself, with the The Blackest Eye EP on August 10 via new label home Don Giovanni Records. Lead single "White Noise" is a bit rougher around the edges than their melodic debut LP, as you can hear for yourself below.

The band have three hometown shows coming up, all at Silent Barn. One is TONIGHT (6/22) with Katherine and Street Eaters. It's an early show, going from 6-9 PM. Then they play a record release show on July 25 with an all-around great local lineup of In School, Vagabon and Palehound. And lastly, they open for Olympia's G.L.O.S.S. on September 23 with openers Moor Mother Goddess. Those are Aye Nako's only shows that we're currently aware of.

Speaking of Palehound, they're set to release their debut full-length, Dry Food, on August 14 via Exploding In Sound. First single "Molly" is out now and can be streamed below.