Azar Swan at MHOW in 2013 (more by Amanda Hatfield) 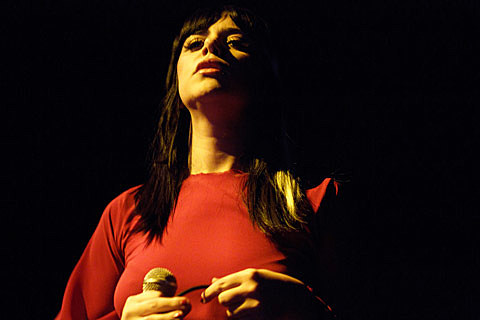 Brooklyn goth pop duo Azar Swan are pretty much regulars in the local live scene, and as usual, they've got more coming up like tonight's (1/24) previously discussed Prurient show at Saint Vitus which also includes Clay Rendering (who are on Dominick Fernow of Prurient's Hospital Productions label) and DJ Becka Diamond. Tickets for tonight's show are still available.

In the following month, they'll open the first of two Suuns shows in NYC, which happens on February 21 at Death by Audio. Suuns also play the next night at Shea Stadium (2/22) with Regal Degal. Tickets for DbA and Shea are on sale now.

The idea was to take something like the Morrissey night at Sway but do it for various other artists I felt deserved such a night. I DJ and invite a musician friend who I know has a specific passion and/or expertise in that artist's catalog to DJ with me each time. For the first one I did Kate Bush with my bandmate Zohra from Azar Swan and it was a lot of fun, good turnout, etc. We don't play exclusively music by that artist, but the stuff that isn't by them is at least tangentially related for the most part.

The next four nights are scheduled, including a Scott Walker night on 1/31 with Andrew Hock (Castevet, Psalm Zero), Talk Talk on 2/7 with Tamaryn, Cocteau Twins on 2/28 with Ning Nong (Raspberry Bulbs), and David Sylvian on 3/7 with Kevin Hufnagel (Gorguts, Dysrhythmia).

Stream some Azar Swan below...