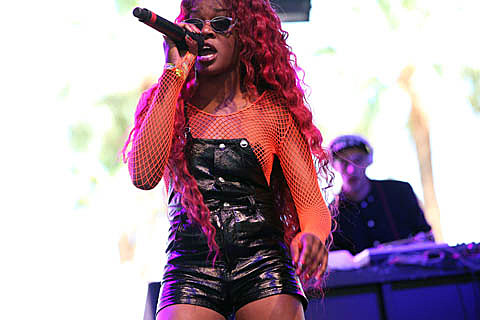 As mentioned, Azealia Banks will play Hot 97 Summer Jam at MetLife Stadium on June 3 in East Rutherford, NJ as part of the parking lot pre-show with Pusha T, Big K.R.I.T., A$AP Rocky, Schoolboy Q, Kendrick Lamar, and Fred the Godson. The Harlem-born world traveller just revealed on twitter that before she heads overseas for a run of festivals, she'll play her own, much smaller show in NYC at Bowery Ballroom that night (6/3), which she's billing as "'MERMAID BALL' + SPECIAL GUESTS." She continued to tweet about the show, adding, "This is especially for the girls!", and for those who don't know, explaining, "Guys: a "ball" is a very traditional gathering of kunts, gays, queers, and weirdoes alike in which various dance contests and bizarre/epic shit goes down. Alot of really Kunty clothing gets worn and everyone has a good ass time." Ticket info and flyer coming next week (UPDATE: Ticket info announced).

Updated dates and a video below...