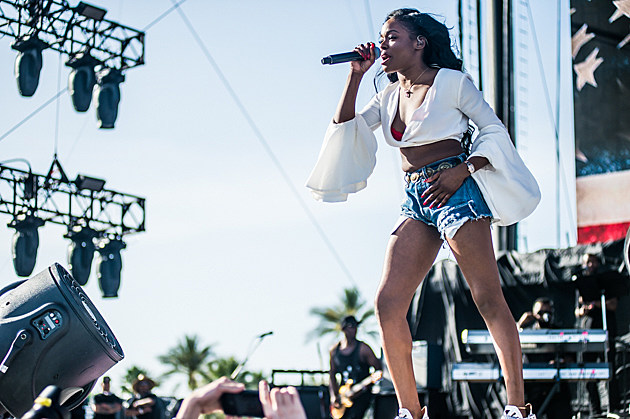 Azealia Banks was recently under investigation for allegedly punching a security guard in LA, and now she's been arrested for attacking one in NYC. Page Six reports that she was at Up&Down, a club in the Meatpacking District, and started an altercation with one of the bouncers after trying to enter the private downstairs party and being told to go back upstairs and get a stamp:

"There was a female security guard and a male guard," a source said, adding they "didn't recognize Banks" -- who began "screaming at the top of her lungs, cursing" and using racial slurs. A club owner noticed the commotion and "gave her a pass to let her in," but "once she was 15 feet inside, she starts to curse at the guards again, explaining who she was, that she's on Rihanna's album."

When security approached, Banks allegedly "spit in the [female bouncer's] face," a spy said. As they escorted her out, "she bites the [female guard] in the breast, almost breaking her shirt . . . as they took her out." A police source added the bite "caused swelling and redness."

The article says she was arrested around 12:30 AM Wednesday morning on a misdemeanor charge of third-degree assault. She's since been released.