Ansari & Eric Wareheim in 'Master of None' 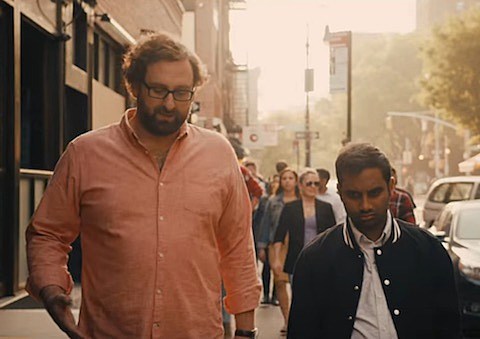 Aziz Ansari has a new sitcom on Netflix, titled Master of None, and its entire debut season will be available to stream on Friday (11/6). He co-created and wrote all 10 episodes with Parks and Rec alum Alan Yang and stars as Dev, a 30-year-old actor in New York. It's been getting great reviews, with TV critic Alan Sepinwall calling it "instantly not only one of Netflix's best series, but one of the best shows on TV." They filmed the show here in NYC, having shot at Brooklyn locations like Baby's All Right (a scene supposedly featuring Father John Misty) and The Commodore. H. John Benjamin, onetime SNL player Noël Wells and Eric Wareheim (who directed many of the episodes) and are part of the cast, as are Ansari's real life parents who play his mom and dad. There was an advance screening of the pilot on Monday night (11/2) at 92Y with Q&A moderated by John Hamm. Anyone go to that?

You can check out the trailer for the show (featuring Iggy Pop's "Nightclubbing" and Joy Division's "Isolation"), and a few episode clips, below.

Plan A: Having a kid with a complete stranger. Plan B: Plan B pills.

Baby's closed today due to gettin all caught up in this binge watching TV game. Stay tuned... Back at it tomorrow for a killer 1-2 with Lower Dens early and Lolawolf late.