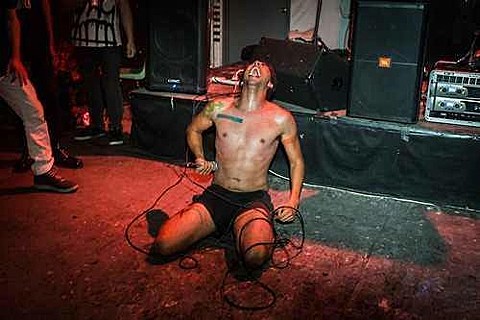 Houston rapper B L A C K I E (all caps with spaces) has releases dating back ten years, and his newest came out last week. It's a two-song 7" that has a collaboration with Stony Hawk and another with SVNS, and it's up the same alley of experimental music that he's been perfecting for the past decade. It blurs the lines between hardcore and abstract rap, and has as much an interest in noise and industrial as it does in hip hop. If you listen to Yeezus, Death Grips or Run The Jewels and not B L A C K I E, you should probably change that. Stream the new 7" below and keep your eyes peeled for his upcoming album.

B L A C K I E is on tour now, and, landing in NYC this weekend for a show on Sunday (11/8) at Trans-Pecos with Juiceboxxx, Show Me The Body and Dreamcrusher. That bill makes a lot of sense. Juiceboxxx is trying to bring back rap rock (and also has some noise elements), Show Me The Body are sort of a punk band but they've collaborated with rappers, and Dreamcrusher makes seriously confrontational noise (he calls it "nihilist queer revolt musik"). Tickets for the show are on sale now.

Dreamcrusher plays that same venue a day earlier, opening the Wolf Eyes release party with Yellow Tears. He has several other NYC shows after that. Tickets for all of them are here.

B L A C K I E also plans to return to NYC for a TBA show on January 9. All dates are listed, with music from everyone on the Trans-Pecos show, below...