Sad news to report from the Detroit hip hop scene.... 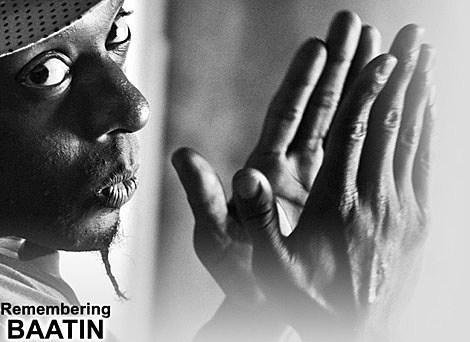 The circumstances of his death remain unknown, [but] ...Baatin's body was found [Saturday] morning in the 14000 block of Anglin Street, said family friend Ty Townson, who was at the scene as Baatin's body was taken to the Wayne County Medical Examiner's Office.

Glover's mother, Alberta Glover, said she didn't know anything about how her son died. She said she's waiting for the medical examiner to tell the family something either Sunday or Monday.... Funeral arrangements are not yet set.

Baatin, who turned 35 in March, left Slum Village in 2002, later telling the Free Press he had been diagnosed with schizophrenia. He continued to record and play occasional solo dates before returning to the Slum fold for the group's upcoming album, Villa Manifesto, due Sept. 22. -[Detroit Free Press]

Baatin recently performed with Slum Village in NY at Rock The Bells and was scheduled to perform at BB Kings with the reunited Reflection Eternal.

A memorial tribute was held Sunday night at 5 Elements Gallery in Detroit.