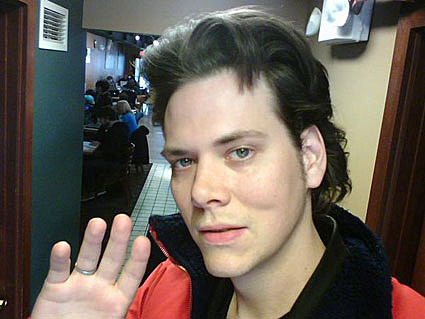 New York's own, one of a kind vocalist/producer/songwriter/MC/DJ/sometime-solo-performer Baby Dayliner put together a new full band over the winter; that band plays its second show tonight (May 22) at the Found Sound Launch Party at Southpaw with Wild Yaks and Himalaya.

Ethan Marunas aka Baby Dayliner is an interesting character. Ably mixing 80s David Bowie, Mellow Gold-era Beck (which BTW we think is the best Beck there is), the best pop standards from the 50s and 60s, David Byrne solo, some Morrissey AND cabaret, the NYC-native and one-man band has been going at his act strong for many years, all the while remaining something of a hyper-literate, hyper-addictive, brashly original artist. [The Culture Of Me]

If you miss the Southpaw show, Baby Dayliner and band are also playing June 21st at the Mercury Lounge.