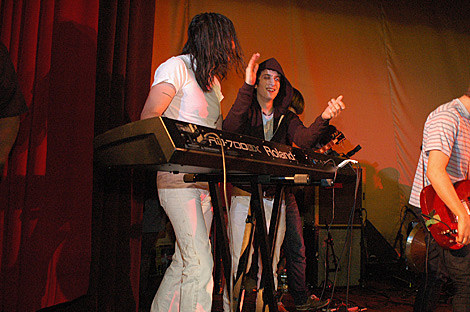 One of the best kept secrets in the entertainment industry, Jonté is known to the stars as a virtuoso choreographer, able to bring out the beast in his clientelle, which includes Beyonce Knowles among others. As a solo act, he brings it on all fronts, executing the freshest moves while spitting the fiercest vocal heard. His unique urban fem style is shattering culture barriers and leaving liberation in its wake. - Santos website

Jonté and a crew of Santos regulars that include Cherie Lily, Bad Brilliance, Narcissister and DJs Roxy Cottontail and Andrew W.K. will be at the club for a party on Thursday, January 28th. Tickets are on sale. We have two pairs of tickets to give away (one of which comes with a bottle of champagne signed by Andrew W.K.). Details are below.

As previously mentioned, Andrew W.K. has quite a bit going on in the coming months. He appears at Joe's Pub on February 11th as part of Gonzales' residency there. He'll be answering your questions at Santos on February 23rd (the same day he releases a new album), and he'll be on Warped Tour this summer.

Andrew W.K. produced a new album for performance artist/cabaret singer/songwriter Baby Dee, though not her next upcoming record A Book of Songs for Anne Marie, which comes out March 23rd on Drag City (pushed back from its original January release date). An album and book with the same name was released by Dee in 2004, but Dee points out "this is a new version of the album, now produced and arranged by Maxim Moston from Antony and the Johnsons." The album Andrew worked on does not yet have a name or release date. He has also played as part of Baby Dee's band in the past,

On February 4th Andrew will be part of "We Sing Baby Dee! #3," a night at Joe's Pub organized by composer Sxip Shirey and dedicated to "Interpretations of the songs of Baby Dee." Also performing will be Corn Mo, Little Annie and Paul Wallfisch, Curtis Eller, Aimee Curl, Lance Horne, Mathew and Sarah, Philip Raia and Lila, "a special guest appearance by 9 year old singer Frankky Lou Hightower from Kansas City" and Baby Dee herself. Tickets are on sale.

Baby Dee will also be performing at The Stone the next night (2/5) with cellist Matthew Robinson. Baby Dee will be touring extensively this February and March in Europe and April and May in North America.

All tour dates, contest info and videos are below... 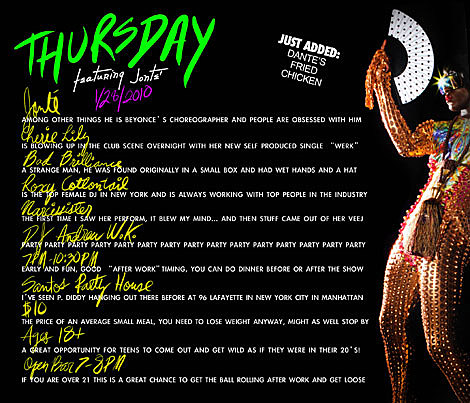 TO ENTER FOR A PAIR OF TICKETS TO SANTOS (2 pairs to give away - ONE OF WHICH COMES WITH AN ANDREW W.K. AUTOGRAPHED BOTTLE OF Marques de Gelida Brut Exclusive Reserva Cava) (technically a sparkling wine), e-mail "bvcontests@hotmail.com" with the subject line "Santos." Include your first and last name. Two winners will be picked at random (only 1 with the wine). The winner will have to show ID and be 21+ to claim the bottle at the door and can drink it at the event.