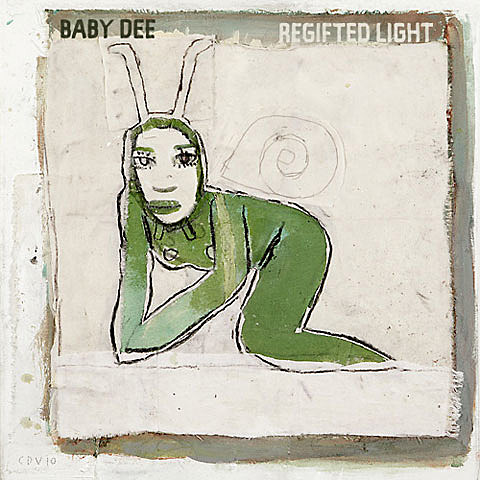 After a successful batch of dates with Swans last year and a recent European jaunt with Current 93, Baby Dee will get back on the road for a set of U.S. dates in May, including a NYC show at Joe's Pub on May 10.

The short tour is in promotion of the new LP Regifted Light, which is out now via Drag City. Produced, mixed, and featuring Andrew WK, the LP contains twelve new tracks, two of which are streaming at Baby Dee's site. The Quietus spoke to Dee and asked things like "How much influence did Andrew WK have as a producer?" Dee said:

Andrew really wanted it to be live and spontaneous and moving, and anyone who's recorded lots, what you really want to avoid is 'well, let's go back and take it from the B section, or fix this or fix that or listen to this take and listen to that take...' and we didn't do any of that. I didn't like the idea of doing that and Andrew didn't like the idea of doing that, so we did it without doing any of that kind of thing. Which was great fun, but the only reason we could get away with it was because Andrew is so good at what he does.

He's the one who mixed it and did the edits and all that, and he's so good at that that he could listen to us do two takes and say, well, I can work with that. We don't need to do anything more. And he could commit to taking what we did and making a recording out of that, no matter what. And he has the chops to be able to do that, so that made it a lot easier, because even though it was huge fun and very spontaneous, I think it was a lot of work for him. Because it doesn't sound like something done in somebody's house, it sounds really produced, I mean it's really symphonic, and that's all because Andrew's so good.

Check out a "commercial" for the album, a video and all tour dates below...