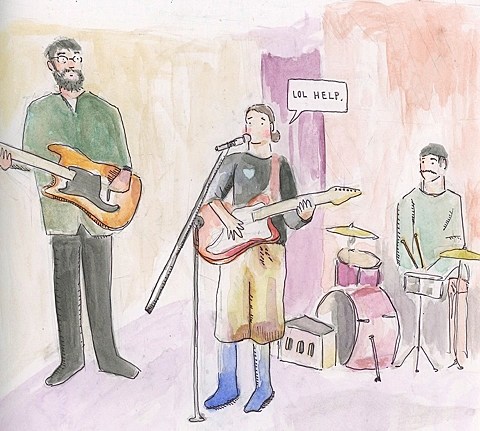 Baby Mollusk began as the solo project of NY's Rachel Gordon, who used the moniker to upload bare, personal, mostly-acoustic songs to her bandcamp, most recently including the Insane Baby EP. She's since taken all four songs from that EP, added four more and picked up a drummer and bassist (both of The Act of Estimating as Worthless) to record the first full-band Baby Mollusk album, Baby Mollusk & the Big Babies, which comes out this week via Mt. Home Arts. As a full band, Baby Mollusk is now making powerful indie rock, and with the songwriting abilities Rachel already developed as an acoustic artist, this is good stuff. A full stream of the album just went up over at The Le Sigh, and you can take a listen to it below.

Baby Mollusk will celebrate the new record with a full band release party upstairs at 603 Bushwick Ave this Wednesday (2/19) with Told Slant, Great Canopy, and Whatever, Dad, the solo project of Crying singer Elaiza Santos. (You may remember that both Baby Mollusk and Whatever, Dad played the Le Sigh launch party with Frankie Cosmos back in November.)