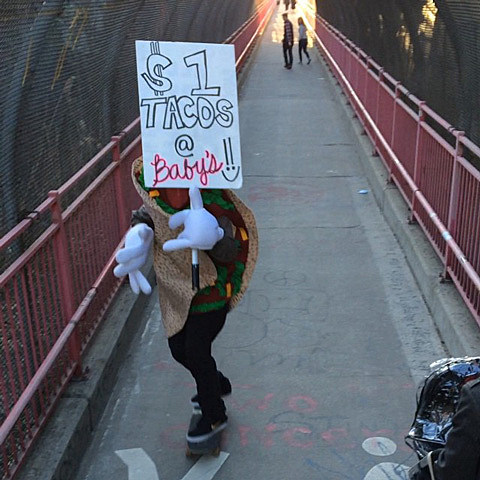 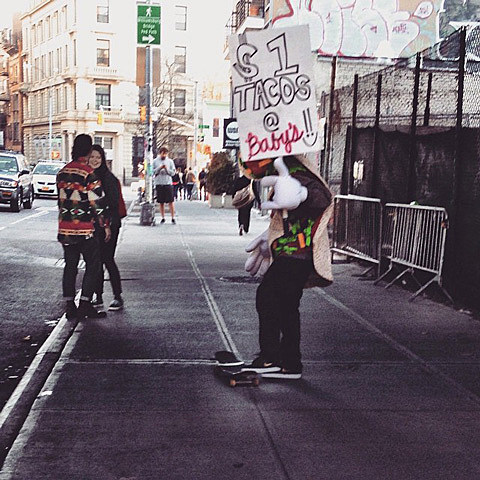 Baby's All Right offers $1 tacos during Happy Hour. What better to promote it than to put a guy in a taco with a big sign and put him on a skateboard down the pedestrian ramp of the Williamsburg Bridge? Also film it for instagram. The human taco in question was Baby's employee Jon Newport who was a pro skateboarder when he was 16. What could go wrong? Not being able to stop, for one, which Newport solved by plowing into a green sedan. He was ok, as was the car and driver, but the skateboard was toast. (Believe it or not, I was just randomly walking down Bedford and saw it happen in real life.) Animal NY interviewed Baby's employee Ben Wilkes who shot the video:

The driver, too, seemed okay -- just a little shocked. Wilkes paraphrased the driver as saying, "I have no idea what happened to me because a taco in a skateboard just crashed into me."

When asked if he would have crashed into the car had he not been drunk, Newport said, "I wouldn't have put that suit on if I had not been drinking."

The drunk taco confirmed that he got paid for the gig, but wouldn't disclose how much. He did, however, get a promotion thanks to the stunt.

He plans to do something similar again. "It worked out great, I can't wait to do it again," he said. "I probably won't get hit by a car, but I will risk my life."

This was all shortly after "Drunk Yoga" with Kirin J Callinan at Baby's, and $1 tacos will definitely be happening this Tuesday (4/14) which means even more reason to get the BrooklynVegan-presented Menzingers show early (admission is first come, first served, even with RSVP). Watch the taco eat shit below...