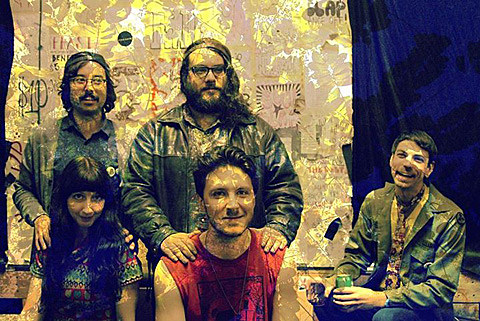 Brooklyn's Backwords, who released Nest back in September, have offered up a version of Christmas hymn "We Three Kings" that makes its premiere in this post. Here's what they have to say about their take:

Inspired by the mystical & dark themes present in both the music and lyrics, we harkened back to the woody-warm and open recording styles of the 60s in this version of the holiday classic. "We Three Kings" was recorded by candlelight in a really cold warehouse space in Bushwick.

We did our best to capture the psychedelic/dark nature of We Three Kings in this version. Happy Holidays and may there one day be peace on Earth.

You can stream Backwords' rendition of "We Three Kings" and new album Nest (via Spotify), below.

You can also catch Backwords live tonight (12/23) at Glasslands where they'll play alongside Shilpa Ray, Economy Punk (OJ from Xray Eyeballs' new band) and headliners The Ugly Club. Tickets are still available. Backwords offered up a tribute to Glasslands, which closes after its New Year's Eve show, and you can read that below.

2014 has been an interesting year for us. We released our 5th record Nest in September, but these songs were actually written in 2012 after coming off of a few years of hard DIY touring and then coming to the conclusion that it's nearly impossible to tour in this manner and sustain as a band. So we took our time with the mixing and production of Nest and decided to be in no rush to get it released - something Backwords has not ever done. For better or for worse, we've always had this fuss free, lo-fi, get-it-out-there-as-fast-as-possible mentality. It felt nice to slow this one down.

While we never intend to focus on a particular theme when writing songs or piecing together our records - they always seem to emerge. Somewhere along the way, it became clear to us that Nestwas an album about growth and change, yes - personal change, but in particular, an album about New York City changing before our eyes. It happened subconsciously - but that is what this album is really about. Backwords started in 2007 and played some of our first shows at places like the original Freddy's, Hank's Saloon, Goodbye Blue Monday, and Southpaw. Now a lot of the venues that were staples for us are gone, it's almost impossible to afford an apartment here, and we're in our 30s.

In December of 2009 we got asked to join a bill with a band called Heliotropes at Glasslands. That was our first time in the venue. We would go on to play there 7 more times over the years, including an album release party for our record, By the Neck. But I remember having this feeling immediately after our first show there, that Glasslands was a big game changer for us. That the people who came out to see shows there were actually like-minded artists and true patrons of indie music, forward-thinking art, i.e., this was the first time I feel like we locked into a sense of community in Brooklyn - a "scene." And Glasslands was indeed a real scene, in the most positive sense of that word. I don't think there is a venue in New York that I personally spent more time in, from supporting friends bands, or going to see touring acts, or just stopping in to hang. The people behind Glasslands, from Popgun to prior, have been nothing but the kindest of souls to us, always true to their vision, and always promoting art over general money making, capitalistic entertainment.

There's no doubt in my mind that as New York City morphs, other Glasslands' will pop up - venues that actually care about music, run by artists who care about art - and I know that some already have. But for this humble guy who moved here hoping to bring a yet another pop-band into this city, Glasslands has been essential to my personal growth as an artist and musician. And in many ways, how Backwords has been able to stay afloat these past seven years, has a lot to do with this venue space.

We couldn't be more thrilled to be playing one last show, (Tues, Dec 23rd) in this magical space.

Popgun and everyone involved with making Glasslands happen over these - thanks for all you have done - it is because of your efforts, people like you and spaces like yours, that New York City has an artistic, innovative, and creative soul.