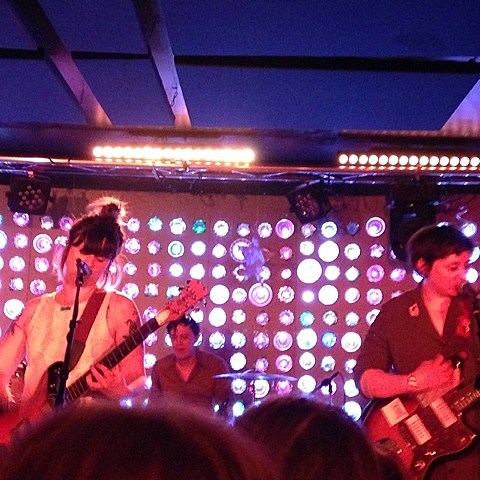 The second annual Indie Pop Prom went down in Brooklyn at Baby's All Right on Saturday (2/22), and like last year was stacked with incredibly solid bands the whole night. All of the bands were relatively "small," and there was certainly no clear cut headliner, but the 200+ capacity venue still sold out, and the place was celebratory the whole time. In prom/party mode as much as "show" mode, Baby's was decorated in balloons, most of the bands were dressed up, and all of them wished Maria Sherman a happy birthday (the show doubled as her birthday bash), two of them even got the crowd singing to her.

And it's inspiring to see how such a celebration could be sparked by bringing together these six small indie and punk bands. The crowd was warmed up by the dramatic post-punk of Syracuse's Friendless Bummer and Pity Sex's choice blend of emo and shoegaze, and by Atlanta's punky Places to Hide (maybe because the punch was starting to kick in), the crowd was dancing, smiling, and singing in a way that only increased as the show went on. Radiator Hospital followed, great as always, playing crowd favorites like "Your Boyfriend," "Do You Remember?" and of course "Our Song" which may have been the loudest word-for-word singalong of the night. (Or was that when Weekend's Shaun Durkan DJed Finch's "Letters to You"?)

After them was maybe the night's most special set, a one-off reunion from Bad Banana. Bad Banana is one of the old projects from Katie Crutchfield of Waxahatchee and her twin sister Allison of Swearin' (both of whom played Indie Pop Prom last year), and after P.S. Eliot's one-off reunion in August, was the second time in the past few months that the Crutchfields revisited an old band following the recent success of their current ones. They were joined by Kyle Gilbride on bass and Jeff Bolt on drums (both of Swearin'), and looked like they were having a legitimately great time playing those old songs. The crowd loved it too. In a live setting without the noisy lo-fi of their recordings, Bad Banana's poppy punk isn't wildly different from what Allison does in Swearin', but while Katie is most often found playing somber Waxahatchee sets these days, it was great to see her getting another chance to rock out. 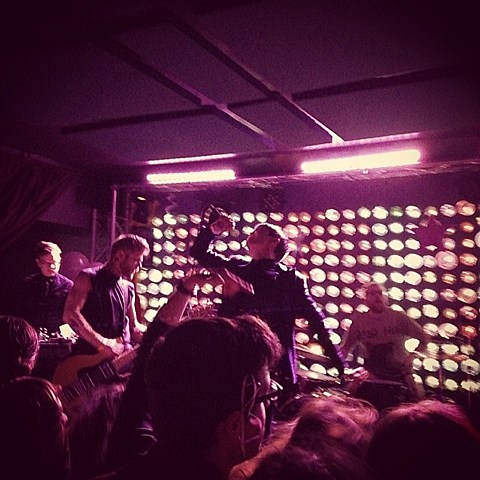 The show wrapped up with the "secret" set from special guests "Traitor Bitches," who, as we guessed, turned out to be Perfect Pussy. The band's noise-fueled punk and intense stage show were killer as ever, and they had hands down the most wild set of the night, resulting in the only part of the show you could actually say broke out into a mosh pit. Forget the hype, if you haven't seen this band live, it's well worth it.

Perfect Pussy will be back in NYC when their tour hits Death by Audio on 4/4 with Friendless Bummer and Mercury Lounge on 4/5 with Green Dreams and Tumul (tickets).

The Crutchfield sisters play NYC again TONIGHT (2/24) at Saint Vitus for the BrooklynVegan/Shiner/Transmission-presented show which features Hop Along, Swearin' and Great Thunder (aka Katie Crutchfield and Keith Spencer of Swearin'/Waxahatchee's live band). The show is free but you had to RSVP, which is now closed. Swearin' have other dates too.