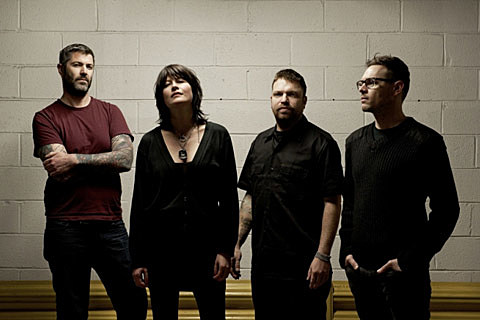 If you can't tell from the above photo then yes, Bad Powers contains Brendan, Coop and Matt from Made Out of Babies... but that isn't Julie Christmas. Bad Powers is a wholly new direction for the trio, having added vocalist Megan Tweed to the mix. The results share some aesthetic choices with the band's former identities (now kaput), yet also with an artier side beyond simply pummel and bludgeon.

Bad Powers is prepping their debut LP for The End Records, due on the label on September 18. Preorder yours here. BrooklynVegan is proud to premiere the LP track "Electricity Should Be Free," which you  can listen to along with the previously-released "New Bruise."

Look for Bad Powers to team with the incredible Sannhet and The Year is One at Saint Vitus on September 21. Tickets are still available.

All streams are below.