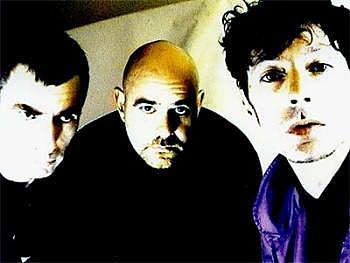 While perusing the internet for my next 'Week in Indie' column (or whatever you call it) my jaw dropped, just a little, when I saw that bailterspace was playing Bowery Ballroom on Saturday (8/23). Missed that listing before. I can't say that I've followed the New Zealand band's long career all that closely lately (their last album was in 2004 which is the last time they played here I think), but their '90s records on Matador/ Flying Nun got a lot of plays in their day on my stereo. A mix of postpunk, noise, shoegaze and electronics, Bailterspace were pretty fearsome live... and really f-ing loud. Bring earplugs.

"The current lineup consists of Alister, Brent and new recruit Ian Ljungquist on bass - all amped and ready to sonically reprogram your biorhythms." No openers are listed. 18+. $15 tickets are still on sale. Oh, and according to their MySpace (which lists their home as New York and New Zealand), "Alister and Brent are working on new material which will be released really soon!"

In other New Zealand indie-noise-rock-pioneers-playing-Bowery Ballroom news, The Dead C have shows and releases lined up too.