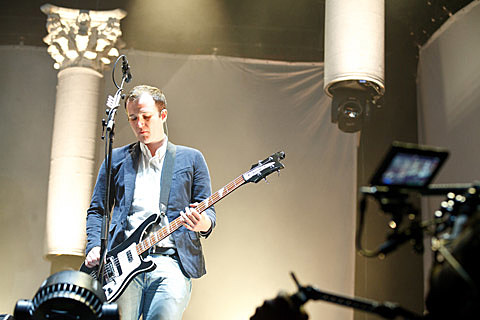 Vampire Weekend bassist Chris Baio (who goes by Baio in his solo project) released his first solo album, The Names, in September via Glassnote. He recently went on tour to promote his album near the release date of the LP, and now announced that he'll be going on another tour in 2016 (following a few more scattered dates this year).

He'll be playing NYC again on February 9 on Bowery Ballroom. Tickets for that show go on sale Friday (11/20) at noon with an AmEx presale starting Wednesday (11/18) at noon. All dates are listed below.

Baio also just released an "expansion pack" featuring remixes of tracks from The Names last week. It's available to purchase online and you can stream it below.

In related news, Rostam Batmanglij of Vampire Weekend is featured on their old pals Ra Ra Riot's first single,"Water," from their forthcoming album Need Your Light, which is out on February 19 via Barsuk. Rostam wrote the song with Ra Ra Riot's Wes Miles, along with the title track. Ra Ra Riot just wrapped up a tour that hit NYC's Baby's All Right earlier this month, and they're playing the just-announced Savannah Stopover Festival in March.

Watch the lyric video for "Water," with the streams of the Baio remixes and his tour dates, below...