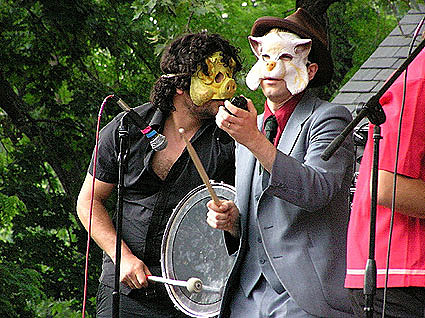 Brooklyn's own Balkan Beat Box are kicking off a tour April 19th at Bowery Ballroom in NYC. They'll be supporting their new record:

The latest in Balkan-Gypsy-funky-electronica from Balkan Beat Box is Nu Med and it’s available as an iTunes download starting Tuesday, April 17th. iTunes is the only place to get the bonus track "Ramallah Tel Aviv" featuring Saz, Palestinian MC from Ramallah joining the BBB gang whose Tel Aviv roots are flourishing in New York City.

Check out a video collage of their 2005 France tour to understand better why you might want to see them live. Heartonastick says their Summerstage show was incredible. More tour dates below...