Roomrunner at Mercury Lounge in September (more by Tracy Allison) 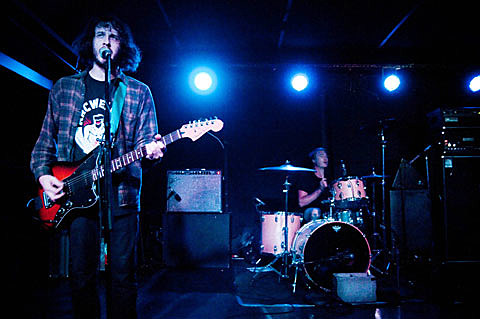 Baltimore grunge bearers Roomrunner have two solid EPs under their belt -- 2011's self titled EP and 2012's Super Vague EP -- and they're in the process of recording their debut full length. No word on when that will come out, but presumably some time in 2013. The band are playing a few shows this January, including one in Brooklyn on January 18 at Shea Stadium with Bambara, Advaeta (who recently announced a show with with Hilly Eye and Sleepies), and Young Adults. Most of the dates on that run are with Northampton's Speedy Ortiz (who recently played NYC with Thurston Moore) but they're not on the NYC date.

Speaking of Shea Stadium and the Baltimore scene, Dope Body will be playing a show at the Brooklyn venue on December 28 with PC Worship, Osekre & the Lucky Bastards, Kntrlr, and Beach Cops.

Streams/videos and lists of dates for all three bands below...