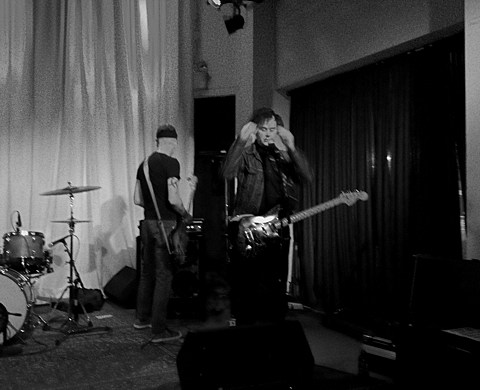 Who are "Advlts, of Baltimore"? If their new 7" on Southpaw is any sign, they're more than your run-of-the-mill "we replaced a 'u' with a 'v' because it looks cool" fare. In 60 seconds, they establish a tone that's powerful in its elegant simplicity with "Raw Nerves". There are handclaps, a three-chord chug, and a guitar line that adds density without attempting to show off. [Evan Minsker's Shake Appeal column on Pitchfork]

Following a 2013 demo, Baltimore punks Advlts put out their first proper release last year in the form of a self-titled EP. It's six raw fun tracks that are over and done with in less than eight minutes. Listen below.

Advlts have two East Coast shows coming up this week: a Brooklyn show on Friday (3/20) at Acheron with Foster Care and Hatrabbits (tickets) and a Richmond show on Saturday (3/21) at Strange Matter with Sundials and others (more info).

Their only other announced show is a hometown show in mid-April. All dates are listed, with their EP stream, below...