Haymaker at Sonar (more by BBG) 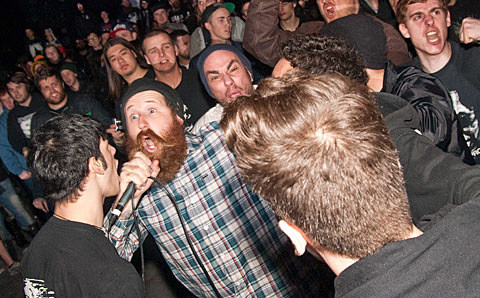 "We here at Sonar regret to inform you that we are no longer able to operate as a venue. Mr. Lonnie Fisher, corporate owner of Sonar, has shut the building down. He has refused to renew the liquor license and the corporate charter for 407 Saratoga Inc. All of the money in our account went into paying our taxes with the promise of the license being renewed and transferred to the new owners."-[Sonar's Facebook]

Sonar, a major Baltimore venue, issued the above statement today regarding their future. Upcoming shows scheduled to take place at the venue include Odd Future, Shellac, Nicole Atkins, Deftones/Dillinger Escape Plan, and Talib Kweli who was supposed to play Sonar tonight.

"Yes, we know about Sonar. It was just brought to our attention. Please DO NOT panic. The festival will still go on as planned. If Sonar does not end up working, we already have a alternative site in the same area that would have a similar set up, so you do not need to worry, and you do not need to consider changing plans. More info about this is expected to be posted on Friday."

Followed by this update just minutes ago:

"In just a few hours, we've managed to get some positive news regarding a new fest location. Everything should be wrapped up in the next couple of days. If the plan stays as is, you will not need to change your hotel plans, etc."