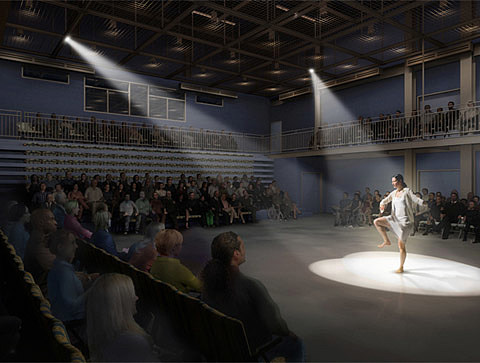 Over three years in the making and ahead of schedule it should be said, let's give a warm welcome to the newest entrant into the BAM family, the BAM Fisher facility:

Join us this September as we inaugurate BAM Fisher, a new facility designed for LEED Gold certification located at 321 Ashland Place-around the corner from BAM's Peter Jay Sharp Building. Part of a new model for the 21st-century arts center, the BAM Fisher offers affordable ticket prices, subsidized rehearsal and performance spaces, and an expanded roster of talks and education and family programs. The BAM Fisher is a place where artists and community come together-and you, the adventurous audience, are an active participant.

Named in honor of longtime friend and former BAM Endowment Trust Chairman Richard B. Fisher (1936-2004), the BAM Fisher serves as the cornerstone of BAM's 150th anniversary celebration and a commitment to the future through its programming and its design. The building features several spaces:

The venue has arrived just in time to join the 30th Annual Next Wave Festival, which kicks off on 9/5 and continues into the new year. The space will host five shows as part of the music program of the festival, including: the anthemic piano pop of Ian & Chad on September 28; the"Psuedoacoustic" incarnation of unique soul songstress Tamar-kali on September 29; cellist Maya Beiser performing opera Elsewhere (10/17 - 20); Theo Bleckmann and American Contemporary Music Ensemble (ACME) taking on the songs of compser Phil Kline (10/25 - 27); and Mantra Percussion who will perform with 2x4s and contact mics as part of an exhibition called Timber (12/13 - 15). Tickets for all Fishman shows during Next Wave are on sale.