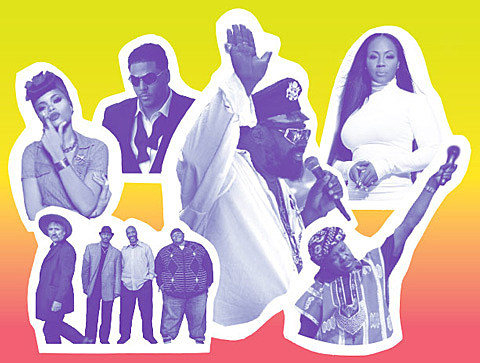 BAM's annual summer R&B Festival which happens Thursdays at noon - 2 PM at MetroTech Commons at MetroTech Center from June 4 - August 6 (corner of Flatbush and Myrtle Aves in Brooklyn). All shows are free and open to the public. This year's lineup:

A more detailed schedule below...

Bobby Rush
Thu, Jun 4, 12noon--2pm
Bobby Rush embodies R&B at its unfiltered best. He began as a bluesman on Chicago's West Side before transitioning to clubs that better accommodated his increasingly bawdy style, captured in songs like "Bowlegged Woman, Knock-Kneed Man" and "Chicken Heads." These days, Rush continues to turn heads and ears, having released the funky Look at What You Gettin' in 2008 and headlining the New Orleans Jazz Fest in 2011.

Andra Day with special guest Kate Davis
Thu, Jun 11, 12noon--2pm
An emergent vocalist, Andra Day's presence onstage is as arresting as her brassy, bluesy, doo-wop vocals. After a rush of praise for her earliest performances, she has found early champions in Stevie Wonder and Ellen DeGeneres. Now signed to Warner Brothers Records, she is touring in preparation for the release of her debut album.

Multi-instrumentalist and vocalist Kate Davis joins Andra Day with her rootsy ballads and plucking bright riffs from her bass. This gutsy songstress is from Portland, OR, and puts a fresh spin on the standards and brings a canonical sensibility to her own lush tracks. Lauded by MTV as one of 2014's 15 Fresh Females Who Will Rule Pop, Davis grew up with an instrument in her arms and a head full of inventive lyrics. Recently, she has shared the stage with such diverse artists as Alison Krauss, Josh Groban, and Renee Fleming.

Erica Campbell
Thu, Jun 18, 12noon--2pm
Fresh of a Grammy win for Best Gospel Album this year, Campbell delivers powerful vocals that incorporate soul, blues, rock, and R&B. While working alongside her sister Tina as the co-founder and co-lead vocalist of the multi-platinum gospel duo Mary Mary has been instrumental in extending the reach of urban contemporary gospel, she will perform her raw compositions for her debut on the MetroTech stage.

Al B. Sure!
Thu, Jun 25, 12noon--2pm
Al B. Sure! took the R&B scene by storm with his1988 multi-platinum album In Effect Mode and his hit single "Nite and Day". Through collaborations with Diana Ross, Slick Rick, Jodeci, Quincy Jones, and others, he is acclaimed as a songwriter as well as a singer. In this MetroTech performance, Sure! will spice up the daytime with his bedroom lyricism and signature falsetto.

King Sunny Adé & His African Beat
Thu, Jul 2, 12noon--2pm
King Sunny Adé brings a hybrid of Western pop and traditional African music with roots in the guitar tradition of Nigeria. A superstar within Nigeria and an enormous influence internationally, Adé has collaborated with a diverse and impressive roster including Youssou N'Dour and Stevie Wonder, and has influenced the Talking Heads, David Bowie, and others. His MetroTech performance is a part of his first North American tour in seven years.

George Clinton & Parliament Funkadelic
Thu, Jul 16, 12noon--2pm
The legendary George Clinton & Parliament Funkadelic make their highly anticipated MetroTech return with their endless supply of psych-funk swagger. Having reached widespread recognition in the 70s and 80s with tracks like "atomic dog," the legendary collective has been extensively sampled by hip-hop artists, most famously by Snoop Dogg in "What's My Name?"

The Jones Family Singers
Thu, Jul 23, 12noon--2pm
The 11-member family collective--including five sisters, two brothers and their father--has been unleashing its jubilant songs of praise on churches and festivals alike for over two decades. With a hipshaking sound that draws from vintage soul and R&B, this performance comes on the heels of its knockout performance at January's Globalfest at Webster Hall, which propelled the family onto the global scene.

Theo Croker
Thu, Jul 30, 12noon--2pm
Grandson of the jazz legend Doc Cheatham, trumpeter and composer Theo Croker is a rising star in his own right, having performed with greats such as Benny Powell, Billy Hart and Marcus Belgrave. Merging genres and idioms, Croker pushes traditional compositional elements into new forms. After the 2014 release of his celebrated album AfroPhysicist, Croker is seen as one of the most promising and talented trumpeters working today.

Jon Cleary and the Absolute Monster Gentlemen
Thu, Aug 6, 12noon-2pm
Considered one of the true innovators of New Orleans-style piano blues, English singer and pianist Jon Cleary has been steeped in the musical culture of the city since he arrived at age 17. In addition to his sessions with the Absolute Monster Gentleman, Clearly has composed for or performed with luminaries including Taj Mahal, B.B. King, John Scofield, and recorded/toured with Bonnie Raitt and her band for over a decade. A favorite within New Orleans and on the blues circuit, their MetroTech performance will draw from funk, soul, and R&B, laying on heavy bayou funk to close out the festival.