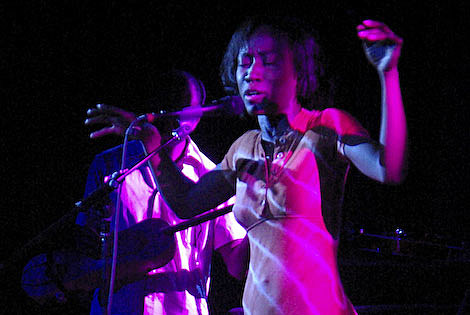 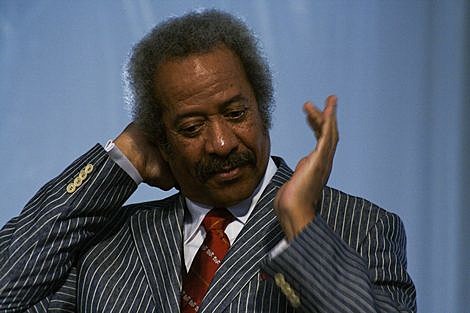 One festival highlight -- previously listed as "A New Orleans R&B legend, to be announced," -- will be Allen Toussaint on Thursday, June 11th. Toussaint recently played six nights at the Village Vanguard.

Rokia Traoré, pictured above, closes the fest on August 6th.

Full schedule and directions to the venue, which is on corner of Flatbush and Myrtle Avenues, below...

Lakeside
Thursday, June 4, noon - 2pm
The funk band Lakeside's self-proclaimed mission is "to continue providing the funk to all generations until the
end!" Formerly known as Ohio Lakeside Express, Lakeside has performed around the world with the likes of
Redd Foxx and Eddie Kendricks and on the Motown ABC and Solar record labels. They have scored hits with
their songs "All the Way Live," "Outrageous," and most notably with "Fantastic Voyage," which was a #1
Billboard hit in 1980 and again a hit in 1994, when the song was covered by Coolio.

Allen Toussaint
Thursday, June 11, noon - 2pm
Composer, producer, pianist and singer Allen Toussaint can, without hesitation, be called a living legend; his
work from the 1960s to today has helped shape the sound of R&B, soul, and funk as we know it. Bringing an
easy-going charm and humor to his repertoire, his seductive, percolating rhythms illuminate and reflect New
Orleans, the city he has always called home. Toussaint has collaborated memorably with artists ranging from Lee
Dorsey and Ernie K. Doe to the Pointer Sisters, from the Meters and Dr. John to the Band and Paul McCartney.

Simone
Thursday, June 18, noon - 2pm
Singer, actress, and performer Simone is the daughter of musical legend Nina Simone. She was raised on three
continents--North America, Europe, and Africa--and her life experiences have contributed to her eclectic
musical output. Simone has performed with jazz bands such as Liquid Soul and on Broadway in Rent, The Lion
King, and Aida. Simone's 2008 album Simone on Simone explores the relationship with her mother through
music, and is backed by The Rob Stoneback Big Band. In Simone's own words: "I use the stage to inspire and
remind people that we are not alone in our experiences."

Spanish Harlem Orchestra
Thursday, June 25, noon - 2pm
Since its formation in 2000, Spanish Harlem Orchestra (SHO) has established itself as a standard bearer of
contemporary Latin music. Directed by world-renowned pianist, arranger, and producer Oscar Hernández, the
thirteen-member all-star ensemble has reintroduced the classic sounds of New York City salsa to music lovers
worldwide. United We Swing, SHO's third album, is a stunning follow-up to their 2004 Grammy award-winning
album Across 110th St., and their 2002 Grammy-nominated debut, Un Gran Día en el Barrio. Hernández says of
the ensemble: "Our music style is the original sound of New York old school "salsa dura" (heavy salsa) that was
played in the early years by our pioneers. That sound has been lost and we want to keep it alive while educating
the new generations (and music lovers in general) on the true musical roots of our culture."

Toshi Reagon
Thursday, July 2, noon - 2pm
Singer Toshi Reagon bridges funk, country, spirituals, and folk. Indeed, genre-bending is her specialty--as The
New York Times raves, "Ms. Reagon's music originates in her love of mixing things up...[her] vocal style ranges
from a dirty blues moan to a gospel shout to an ethereal croon." A seasoned live performer, Reagon jumped into
the spotlight when she dropped out of college to tour with Lenny Kravitz as his opening act. Reagon hasn't
stopped earning the respect of musicians, the praise of critics, and the love of fans since then. She has also shared
the stage with numerous musicians, including Nona Hendryx, Pete Seeger, Chocolate Genius, Dar Williams, and
Ani DiFranco.

Rebirth Brass Band
Thursday, July 9, noon - 2pm
Simply put, ehe Rebirth Brass Band is a New Orleans institution. Few bands can boast a 23-year history and
maintain the level of vitality and enthusiasm of its formative years. The Rebirth Brass Band travel the world
performing for its loyal fan base, headlining and sharing the stage with artists such as The Grateful Dead, the
Meters, the P-Funk All-Stars, Maceo Parker, Dr. John, The Ohio Players, and Ani DiFranco. They have recorded
with artists including N'Dea Davenport, G. Love, Robbie Robertson, and the Wild Magnolias, and have
performed at virtually all major jazz festivals including the New Orleans Jazz and Heritage Festival, Rokslide,
Glastonbury Festival, Montreux Jazz Festival, North Sea Jazz Festival, and the Nice (France) Jazz Festival.

Anthony David
Thursday, July 16, noon - 2pm
Singer, songwriter, and guitarist Anthony David, a Georgia native, has spent his whole life writing songs. David
wrote the song "A Part of My Life" for India.Arie's album Acoustic Soul, which went double platimum and was
nominated for seven Grammy Awards. David has released two independent albums, Three Chords & The
Truth and Red Clay Chronicles, which the Atlanta Journal & Constitution called "the best record to come of this
city since Usher's." David's most recent album and major label debut, Acey Deucy, includes a duet with
India.Arie, "Words," which was nominated for a 2009 Grammy Award. India.Arie said of David, "I love Tony's
music for how he speaks from a man's emotional perspective in relationships, and his views on learning about
life as a young man of the hip hop generation." David recently co-founded Soulbird Music, an independent
record label, with India.Arie and Universal Republic Records.

Kindred the Family Soul
Thursday, July 23, noon - 2pm
Kindred the Family Soul is the husband-and-wife team of Aja Graydon and Fatin Dantzler, drawing comparisons
to the soul duets of Marvin Gaye and Tammi Terrell. Kindred has achieved success with their singles "Far
Away," "Stars," and "Where Would I Be? (The Question)," and their recent album Surrender To Love--
nominated for a 2004 Soul Train Music Award. The duo's album In This Life Together won a 2006 BET Award.
Kindred's most recent album, The Arrival, was inspired by the birth of Graydon and Dantzler's twin daughters in
2007.

Ladysmith Black Mambazo
Thursday, July 30, noon - 2pm
Ladysmith Black Mambazo represents the traditional culture of South Africa and is regarded as the country's
cultural emissary at home and around the world. Their first U.S. album release, Shaka Zulu, was produced by
Paul Simon and won the Grammy Award in 1987. Since then they have been nominated for a Grammy Award
eleven additional times. Their most recent release, Long Walk To Freedom, was nominated for two Grammy
Awards in 2007. The group has also performed at two Nobel Peace Prize Ceremonies, a performance for Pope
John Paul II, South African Presidential inaugurations, the 1996 Summer Olympics, and BAM's Love in Hard
Times: The Music of Paul Simon (2008 Spring Season).

Rokia Traoré
Thursday, August 6, noon - 2pm
Malian singer, songwriter, and multi-instrumentalist Rokia Traoré sings almost exclusively in her native
Bamanan, a language rich in metaphor. Traoré gained international acclaim for her unique style; The Times (UK)
has said: "Her voice transforms everything it touches. Sometimes caressing, sometimes keening, it is as agile as
some rare desert bird." Traoré's last album Bowmboi included collaborations with the Kronos Quartet, and in
2006, she wrote and performed a new work for Vienna's New Crowned Hope Festival, a series curated by Peter
Sellars in celebration of the 250th anniversary of Mozart's birth.

MetroTech Center is situated in the Civic Center / Borough Hall area of Downtown Brooklyn. The BAM Rhythm & Blues
Festival at MetroTech concert stage is located on the lawn at MetroTech Commons.

By Car:
Public parking is available at One and Two MetroTech Center. The entrance to Parking Lot P is on Lawrence and Bridge
Streets between Willoughby Street and the Myrtle Promenade or at The Gallery at MetroTech. The entrance to the Parking
Lot is at the intersection of Flatbush, Willoughby, and Gold Streets.