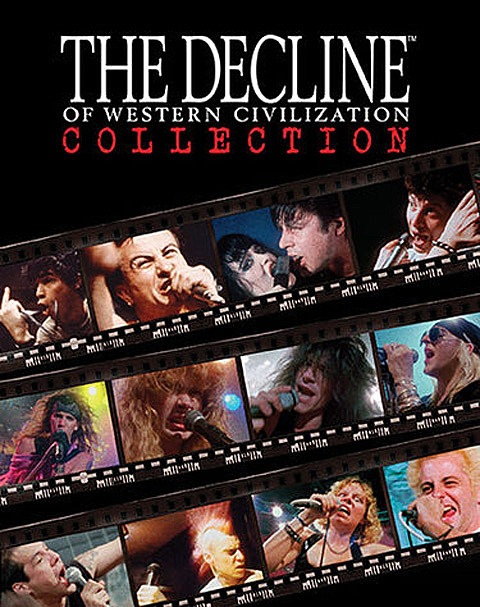 The BAMcinemaFest returns for its seventh annual year from June 17-28. They'll have the NY premieres for several films, and there are a few pretty cool special events too.

On a music-related note, beloved punk documentary The Decline of Western Civilization is getting a new restoration and that will be screened alongside a Q&A with director Penelope Spheeris on June 19 at BAM Rose Cinemas. The initial film, which includes footage of Black Flag, Germs, X, Alice Bag Band, Circle Jerks, Catholic Discipline, and Fear, was released in 1981. That was followed by 1988's equally indispensable Part II: The Metal Years that followed LA hair metal scene (KISS, Alice Cooper, Poison, Ozzy Osbourne, WASP...and Lemmy), and a third film on '90s "gutter punk" (Final Conflict, Litmus Green, Naked Aggression, The Resistance). The first two have been out-of-print (and highly bootlegged) since the '90s and the third one was never released on home video at all. Happy day: the whole series is finally getting released as a DVD/Blu-Ray box set on June 30 via Shout! Factory. The box set will feature newly-restored 2K prints of the films plus outtakes, lots of deleted scenes and commentary tracks by Dave Grohl.

A non-music but still very cool special event happening during BAMcinemaFest is a screening of cult '90s film Kids, which turns 20 this year. (And also notable to indie rock nerds since Lou Barlow did the soundtrack.) The screening happens June 25 at BAM Rose Cinemas, and there will also be a Q&A with some of the main cast members, including Chloe Sevigny (Jennie), Rosario Dawson (Ruby), Leo Fitzpatrick (Telly) and. Screenwriter Harmony Korine and director Larry Clark will be there too. Sadly neither Justin Pierce (Casper) or Harold Hunter (who was also Harold in the movie) will be there, as we lost both of them years ago. (Justin to suicide in 2000 and Harold to a cocaine-induced heart attack in 2006). Though as New Yorkers may know, there's a park named after Harold in NYC, and for the past 8 years October 11 has been Harold Hunter Day. The Harold Hunter Foundation was also launched in 2007, and its "goal is to harness the power of skateboarding to transform lives."

Another cult '90s film, Richard Linklater's Slacker, will get an outdoor screening during the fest at Brooklyn Bridge Park on June 25.

And one more music-related event: A screening of Les Blank's Leon Russell documentary, A Poem Is A Naked Person, which was filmed from 1972-1974 but not publicly released until this year, on June 27 at BAM Rose Cinemas. It got its world premiere at SXSW, and this will be its NY premiere. It looks like Criterion will be putting it out on home video at some point.

Check out the full list of films, with a clip of a Darby Crash interview from The Decline of Western Civilization and the disturbing fight scene in the park from Kids, below...