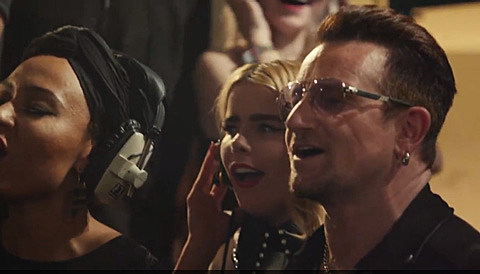 It's Christmas time and there's no need to be afraid...unless you're scared of charity singles. Then maybe it is. Bob Geldof's Band Aid is 30 years old this year and to celebrate they've re-recorded "Do They Know It's Christmas?" (co-written by Midge Ure) with a whole load of new pop stars, including Sam Smith, Elbow's Guy Garvey, Chris Martin, Jessie Ware, One Direction, Disclosure, Ellie Goulding, Seal and more. A few of the original's performers have returned for this one, including the recently-injured Bono, who finds himself in the exact same place in the song. With a bit of a lyrical rewrite. His line was easily the original's most infamous, horrible lyric, "tonight, thank god it's them instead of you" but he now sings "tonight we're reaching out and turn to you." Oh, that's better.

The song is available to buy on iTunes and proceeds go to help fight Ebola. Will we get Live Aid 30 in 2015? Stay tuned. The video for "Do They Know It's Christmas? (2014)" debuted on The X Factor and you can watch it, and check out the full list of performers, below...