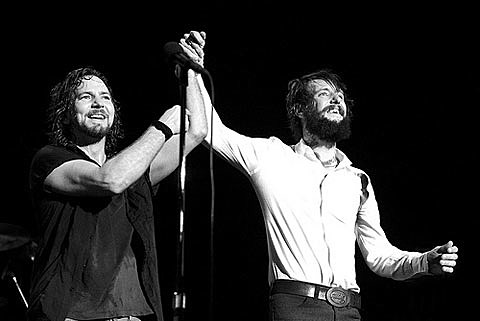 Tour closers always have a lot of hype and [Pearl Jam's May 21st MSG show] has already lived up to it. As "Band of Horses" is milling about sidestage, you assume you'll get "All Along the Watchtower" and that'll be it. Ben Bridwell is introduced on stage, gives humble hugs and handshakes to all members sans Ed and here we go.

But the unmistakable deep-toned beginning of "Hunger Strike" starts and the crowd issues an enormous gasp in unison. Holy Crapola! Then it hits you - the perfect "cover". Can you think of a song that the entire band can play flawlessly, but without the key ingredient - Cornell's high-frequency singing - the song just can't be done alone? Bridwell's selection - like Sleater-Kinney's Corin Tucker in 2003 and Wolfmother's Andrew Stockdale in 2006 - is ideal. Cornell''s ... er ... Ben's vocal is first, and early, and he steps right out with a nervous smile but joy bursting from his eyes. He's a nervous, pacing lead man on stage and the thrill of the moment can't keep him from standing still. The rest of the band - once pensive on stage - are now side stage and all wide-eyed and smiling at their mates' effort. [Two Feet Thick]

One night after playing Madison Square Garden with a four-piece version of the Black Keys opening, Pearl Jam played the venue with Band of Horses in the opening slot. They invited BoH's Ben Bridwell to the stage during their second encore to sing on "Hunger Strike," a Temple of the Dog song and duet between Eddie Vedder and Chris Cornell. Video of that performance, and setlists, below...

Band of Horses will be back in NYC for a show on June 20th at Williamsburg Waterfront with Grizzly Bear and Karen Elson.

--
Pearl Jam at Madison Square Garden May 21, 2010 setlist
Corduroy
Hail, Hail
Do The Evolution
World Wide Suicide
Got Some
Breath
Nothingman
I'm Open
Unthought Known
Grievance
Amongst The Waves
Present Tense
Not For You / Modern Girl
Push Me, Pull Me
Rats
Daughter / W.M.A.
The Fixer
Why Go

--
Band of Horses at Madison Square Garden, May 21st 2010 setlist
Monsters
The First Song
The Great Salt Lake
Is There A Ghost?
Laredo
Compliments
No One's Gonna Love You
The Funeral
The General Specific
Am I A Good Man (Them Two cover)