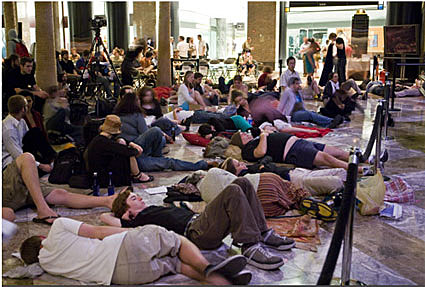 Returning to the Winter Garden for a third year, the Bang on a Can Marathon has redefined what contemporary music is, how it is performed and where it is presented. This year, as a co-presentation with arts>World Financial Center, BoaC stages a 12-hour torrent of mind-boggling, genre-bending music. A continuous stream of pioneering artists from around the globe will take the stage in the Winter Garden for a musical adventure. The Bang on a Can Marathon begins Saturday night at 6pm and continues to 6am on Sunday, so come and go as you like or stay all night long.

Bang on a Can NYC Marathon: May 31st-June 1st

This year's Bang on a Can Marathon (co-presented by the River to River Festival and arts>World Financial Center) will be taking place at the World Financial Center Winter Garden in New York City from 6pm on May 31st through 6am on June 1st. We are putting the finishing touches on this year's stellar line-up; some highlights include:

And be sure not to miss a special sunrise performance of Karlheinz Stockhausen's Stimmung by Toby Twining Music.