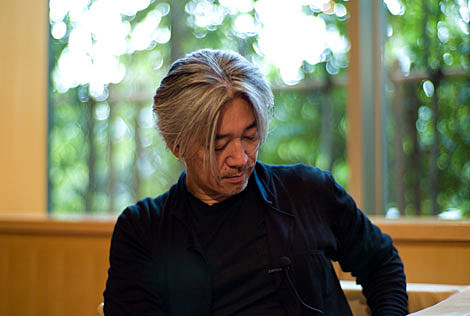 The Bang on a Can Marathon returns to World Financial Center for its fourth year to kick-off the 2009 River To River Festival on May 31st. The 12-hour marathon (noon-midnight) of mind-boggling, genre-bending music will include Ryuichi Sakamoto, Tortoise, Bill Frisell, Bang on a Can All-Stars and more.

As previously reported, Tortoise will play a Saturday, May 30th show at the Bell House, in addition to the Marathon. Tortoise also has an appearance at Pitchfork Fest, plus a new album coming out and a track on Thrill Jockey's Record Store Day comp.

Michael Gordon, whose work will be performed at the Bang on a Can Marathon, is also having his composition Trance performed by Signal at a (Le) Poisson Rouge show on Wednesday, April 22nd.

Other free shows coming up at the World Financial Center this summer include M83, Mountains and Scanners. Clogs and Laurie Anderson play there TONIGHT (April 15).

The Japan Times recently profiled Japanese pianist and composer Ryuichi Sakamoto, who will be performing at the Bang on a Can Marathon, about his 30 year career and his connections with David Bowie, John Cage, and others. Read an excerpt from that, with videos of Sakamoto solo and with Iggy Pop, below...

Hearing Ryuichi Sakamoto talk softly about his 30 years in music, which have elevated him to the status of an officially designated National Treasure, is to witness a perfect exercise in Japanese modesty.

"I haven't achieved anything," he says as he reclines on a sofa in the backstage bowels of Kochi Prefecture's awkwardly named Cul-Port Plaza down in Shikoku. "This is how I feel.

"Maybe someday in the future I will do something . . . but I'm not satisfied with what I have done so far."

Hold on a moment, let's just remind ourselves of a few things here.

As one third of Yellow Magic Orchestra, in the late 1970s and early '80s, Sakamoto helped spark the Western chart-topping New Wave synth revolution that still reverberates through every electro-influenced track from the likes of LCD Soundsystem and Daft Punk to Perfume.

Viewed as Kraftwerk's Asian counterparts, YMO brought Japanese music out of its insularity into a world of success not experienced by any Japanese native since singer Kyu Sakamoto in the '50s. Since YMO went their separate ways in 1984, Sakamoto has flourished as a solo musician.

He has released film scores including "Merry Christmas Mr. Lawrence" (1984), in which he starred opposite David Bowie, and "The Last Emperor" (1987), for which he received an Academy Award. In addition, his own albums -- including "XYZ" -- have hit the spot worldwide. [Japan Times]