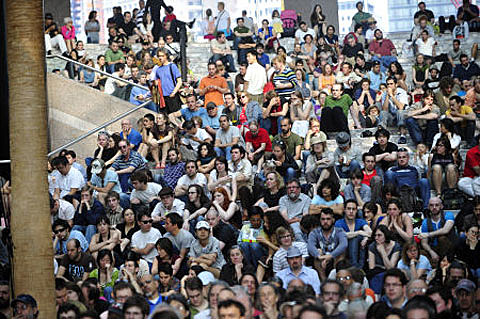 The schedule is up for this year's Bang on a Can Marathon, the free day-long affair hosted at the World Financial Center Winter Garden. This year's 12-hour show takes place on Sunday, June 27th from noon to midnight. It starts with a performance by John Hollenbeck Large Ensemble and closes with sets by Burkina Electric (who also play SummerStage), and new music ensemble Signal doing a piece by BoaC cofounders Michael Gordon, David Lang and Julia Wolfe. The entire thing is posted below. There's also a Youtube playlist of this year's artists to get yourself acquainted.

The Marathon will be recorded for an episode of WNYC's New Sounds in August, but before that the station will be broadcasting and streaming (on Q2) parts of BoaC marathons past (possibly including 2007's 27-hour fest, 2008's 4am Dan Deacon set or parts of last year's thoroughly enjoyable show).

The full schedule and details on the radio programming are below...

The 2010 Bang on a Can Marathon is being recorded for broadcast in August on WNYC Radio's New Sounds (www.wnyc.org/shows/newsounds) hosted by John Schaefer, and Q2, New York's 24/7 online music stream (www.wqxr.org/q2). Leading up to the Marathon, New Sounds will broadcast excerpts from previous Marathons at 11pm on Thursday, June 24, 11pm on Friday, June 25, and streaming on demand after the original broadcast. In addition, Q2 will launch "Cued Up on Q2," a new summer festival of pioneering and invigorating new music recorded live in New York. "Cued Up on Q2" will debut on Sunday, June 27, coinciding with the 2010 Bang on a Can Marathon. The inaugural show will feature selections from previous Marathons, and will air at 2pm on Sunday, June 27, with encore presentations at 8pm on Tuesday, June 29 and at 4pm on Thursday, July 1.