Asphalt Orchestra outside Lincoln Center in 2010 (more by Benjamin Lozovsky) 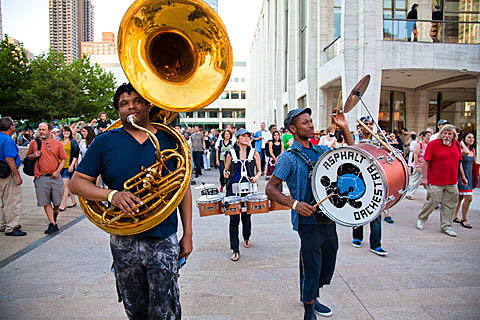 Bang on a Can returns with its incomparable 12-hour super-mix of genre-defying music featuring over 150 astounding musicians and composers from throughout the world. Highlights include Philip Glass performing live with the Bang on a Can All-Stars; music by Bryce Dessner of The National; sonic downtown legend Glenn Branca; the outerplanetary Sun Ra Arkestra; the Asphalt Orchestra playing music by David Byrne/Annie Clark, Yoko Ono, and Frank Zappa; the intrepid Signal in a blistering string orchestra work by Julia Wolfe plus New York premieres by Richard Ayers, Fausto Romitelli, Poul Ruders, Toby Twining and much more! 12pm-12am. World Financial Center Winter Garden, 220 Vesey Street.

For more on what this 12-hour free show is like, check out our pictures from 2010.

Meanwhile catch Bang on a Can performing Steve Reich at Carnegie Hall on April 30th.

In July Bang on a Can head to MASS MoCA for 20 days. Details below...

---
Bang on a Can Summer Festival at MASS MoCA

July 11-31, 2011
MASS MoCA, North Adams, MA
North Adams explodes with music as the fellows & faculty of the Bang on a Can Summer Music Festival use every available space on the MASS MoCA campus & throughout the community to create and perform music. The festival features two recitals a day (Mon-Fri at 1:30pm and 4:30pm and Sat at 4:30pm), free with gallery admission. We will also throw our annual music bash, the Summer Marathon, a six-hour blow-out festival finale on July 30.
Festival passes will be available. See past summer archives for a sample schedule.