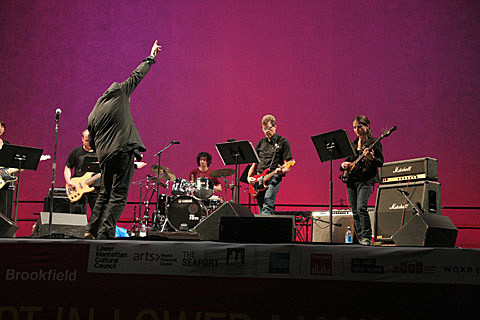 As previously announced, the 2012 River to River Festival will kick off with the annual 12-hour Bang on a Can Marathon on June 17 from noon to midnight at the World Financial Center Winter Garden:

River to River just released the full Bang on a Can Marathon schedule which is detailed below.

Meanwhile, you can also catch Thurston Moore in NYC tonight (5/31) with Bill Nace and Joe McPhee.

2012 Bang on a Can Marathon Schedule:
Please note that times are approximate and subject to change.

Guitarist Kaki King
Bang on a Can All-Stars performing Instructional Video, Breakfast at J&M, and Matt Damon by David Longstreth; and Piano Studies 2a, 3c, 4a, 11 by Conlon Nancarrow (arr. Evan Ziporyn)
Alvin Lucier narrating his own I am sitting in a room with James Fei, digital delay system