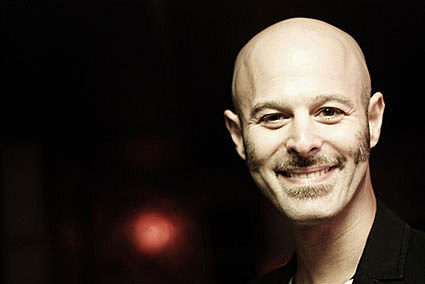 Craig Wedren helped put together this "Get Up And Vote" show at Bowery Ballroom on February 4th. All his friends from Stella will be there, his former bandmate Nathan Larson, Nathan's wife Nina Persson, Joan as Policewoman, AND: OK GO (of YouTube fame) are headlining. More details below.....

WHAT: A rare evening of outstanding music and comedy on the eve of the 2008 primary elections (aka ‘Super Tuesday,’ where over 20 states will most likely determine the two final Presidential candidates).

WHO: The show will be hosted by the comedy group “Stella” with David Wain, Michael Ian Black and Michael Showalter. Musical guests include: OkGo, Craig Wedren, Nathan Larson and Nina Persson, plus other surprise guests.

WHY: To remind young voters to get up and VOTE the next day in the Presidential primary elections, and, specifically, to vote for Barack Obama who, in our opinion, is the only viable and honest candidate that represents actual, meaningful change for our country in this time of acute political, social, and economic decline, as well as lost international standing. College-aged Americans are, historically, a lazy voting block. But they are also huge in number, and could turn the tide of the 2008 elections if they show up at the polls and vote on primary day, as well as in November for the national elections. More than any other candidate, Obama has been inspiring a spark of real interest and hope among this traditionally apathetic crew, and it is our goal to help fan the flames of action as far and wide as possible.

HOW: The event will be a straight concert, not a rally or a fundraiser. It will be neither preachy nor didactic (no banners or platitudes), but a clear, inspiring reminder for viewers and listeners to get off their asses and vote. We will be using new –as well as traditional- media outlets (blogs, podcasts, online social networks, websites, magazines, newspapers, etc.) to publicize and broadcast the show and it’s message to as many young voters as possible. If you can help us by donating time, ideas, services, artists, etc., just leave a message for us here.

Change what’s going on in your country (and in the world) by voting, not just in the November Presidential elections, but in the primaries on ‘Super Tuesday’, Feb. 5, 2008, which will determine the final two Presidential candidates. Have a say in who runs. Don’t be lazy. Register NOW at www.rockthevote.com –the cutoff dates for voting in the all-important primaries are VERY soon.

Thank you!
Craig Wedren, Meggan Lennon, and everybody at getupandvote

Tickets are not on sale yet.