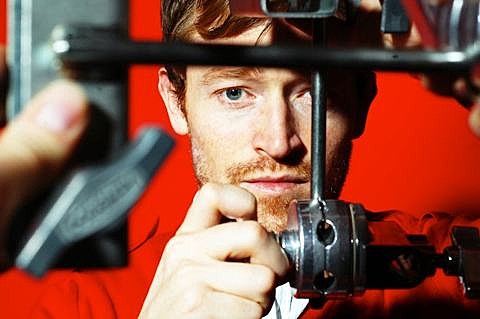 UK resident James Mathé will soon be pulling double duty, both as a touring member of Jose Gonzalez's band Junip (who are starting a North American trek next week) and as an opener too, with his own project, Barbarossa. Having just signed to Memphis Industries, Mathé will release his second album as Barbarossa, Bloodlines, on August 5.

Where his first album, Chemical Campfires, was lovely acoustic folk, Mathé has reinvented Barbarossa for the new album which is much more electronic. "I loved the acoustic scene, but knew it was not all I was about, so I dug out all my old casiotone keyboards, drum machines and analogue synths and just started writing." If you like the more soulful, reflective side of Hot Chip, you should definitely check him out. You can watch the video for the album's first single, "The Load," below.

In celebration of the Junip tour -- which hits NYC on June 13 for a sold-out show at Highline Ballroom with Quadron -- Barbarossa has covered Junip's "Line of Fire" which definitely takes the song in a more low-key direction, but no less lovely. We've got the premiere of that and you can stream it below.

All Barbarossa dates are listed below...