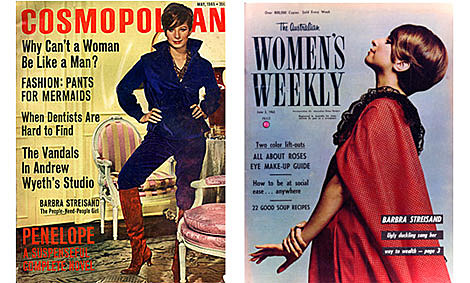 Neil Diamond played the Bitter End in May 2008. Barbra Streisand will appear at the Village Vanguard on Saturday, September 26, 2009. More info below...

In what promises to be a once-in-a lifetime thrill for a hundred of her luckiest fans, Barbra Streisand will celebrate the release of Love Is The Answer---her new album of jazz standards and classics--- by singing a selection of these songs at New York¹s legendary Village Vanguard on Saturday, September 26, where she last performed in 1961 as the opening act for Miles Davis.

Free tickets to Barbra Streisand's performance at New York's Village Vanguard will be made available only to fans who either pre-order this exciting new CD or register an entry blank free of charge. Full details and rules can be found here.

Barbra Streisand's history with the Village Vanguard dates back 48 years when she sang one night only on a bill starring Miles Davis. Subsequently Streisand , built a reputation in Greenwich Village as an extraordinary newcomer on the scene, a not-to-be-missed star on the rise singing in clubs like The Lion and Bon Soir. With its astounding acoustics and intimate vibe, The Village Vanguard, an epicenter of the New York jazz scene since an all-jazz policy was implemented in 1957, was, and is, the place to play.

The first full-length collection of new studio recordings from eight-time Grammy award winner Barbra Streisand since 2005's Guilty Pleasures, and first new Barbra Streisand album since Live In Concert 2006, Love Is The Answer showcases the artist as a cabaret and jazz singer of emotional clarity, depth and maturity, offering the listener a warm and intimate selection of late night meditations on love's powers, heartbreaks and solaces.

Love Is The Answer provided an opportunity for Streisand to work for the first time with the Grammy-winning Canadian jazz artist Diana Krall (piano) and her quartet (guitar, bass, drums) who brought a refined and sensual poignancy to the album's spare and subtle accompaniments.

Rounding out the album's smoky after hours ambience with his sublime orchestrations is the legendary songwriter ("The Shadow of Your Smile") and Grammy-winning arranger Johnny Mandel (who worked with Streisand on her 1993 Back to Broadway album and arranged/co-produced Krall's 1998 Grammy-winning When I Look In Your Eyes).

Love Is The Answer may currently be pre-ordered here.