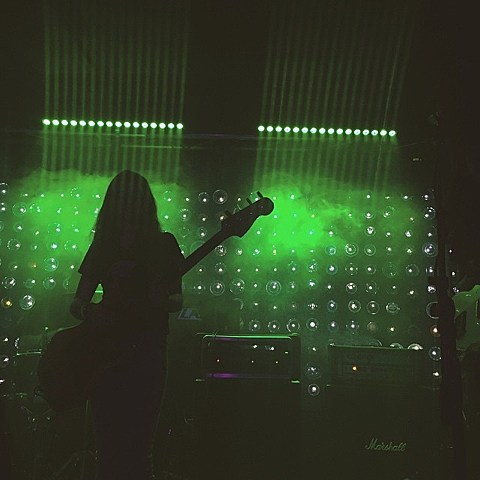 Teenage Barcelona punks Mourn gave their debut LP a US release on Captured Tracks earlier this year, and last night (3/29) the band made their US live debut in Brooklyn at Baby's All Right. It's still pretty clear that they're a young band with a lot of potential, rather than a fully-formed great band right off the bat (which is not a bad thing at all), but last night's show was definitely a good one. Co-lead singers/guitarists Jazz Rodríguez Bueno and Carla Pérez Vas brought a ton of energy to the show, and their screams were as piercing in person as you'd hope they'd be. Their sung vocals were great too, and probably the best part of their show. Plus, having a powerful drummer didn't hurt their live set either.

The crowd was super into them too, and the band seemed legitimately shocked and excited at the turnout. Not sure if Baby's was sold out, but it was packed and people were screaming after every song. Jazz and Carla told the crowd more than once how there was their first US show and they couldn't believe how many people came, and the audience was pleading for an encore, to which the band replied more than once, "We don't have any more songs!"

Mourn do it again at Mercury Lounge tonight (3/30) with Laced (mem Beach Fossils, Nude Beach), and tickets are still available. That's the early show before the sold-out Swervedriver show at the same venue.

Opening last night's show was Mourn's Brooklyn-based Captured Tracks labelmates EZTV, who had Woods guitarist Jarvis Taveniere playing with them (Jarvis produced their single too) and have two more local shows in the next couple weeks.