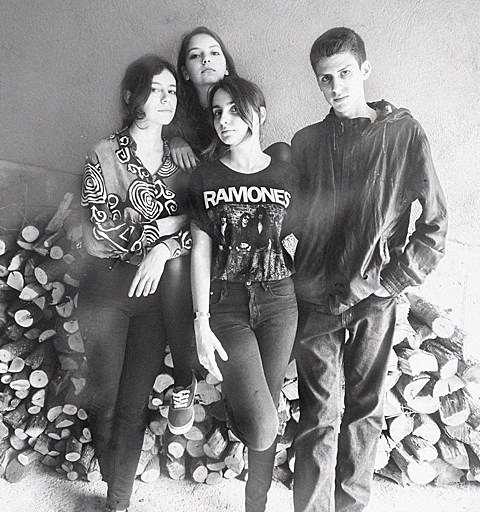 Who was the first artist that made you identify with punk rock?

[...] Do you think English is more effective than Spanish when it comes to writing in this style of music?

JRB: We started writing in English because we listened to a lot of music in English. Here, if you write in English, people will listen to you, but they won't understand what you're saying. People have the image that if you sing in English, it's more professional and cooler, but I don't think it's the only language you can express yourself in. [Pitchfork]

The above interview is with teenage Barcelona punks Mourn, who recently signed to Captured Tracks, who's giving their self-titled debut album a US release on February 17. That the band loves PJ Harvey makes sense. They don't exactly sound like her, but they have a similar knack for being punk and indie rock at the same time, aggressive without sacrificing melody, and having a commanding and unrestrained vocalist. Like many great punk bands before them, Mourn don't shield their anger in metaphor: lines like "Just go fuck yourself!" and song titles like "Boys Are Cunts" are all over this record. Take listen to the whole thing via Rdio, below.

Mourn are on board for hometown festival Primavera (with another hero of theirs, Patti Smith), and they'll go on their first US tour this spring. So far their only announced dates are in NYC and LA, but given the timing of their trip, it wouldn't be surprising if they play SXSW too. The NYC shows happen on March 29 at Baby's All Right and March 30 at Mercury Lounge. Tickets for Baby's are on sale now, and tickets for Merc are on AmEx presale, with the general on-sale starting at noon on Friday (1/30).

UPDATE: The full tour has now been announced (no SXSW). A new video is out too, and you can watch that, with the list of dates and album stream, below...