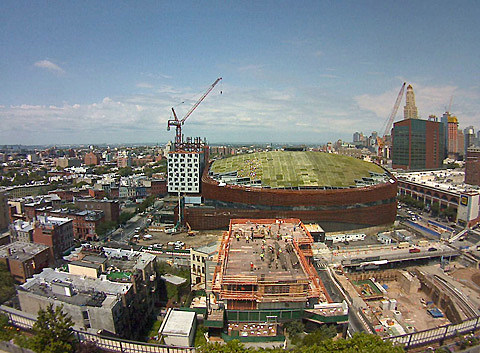 The 135,000-square-foot area is in the process of being covered with a layer of sedum, a genus of flowering plants that store water in their leaves. The idea is to capture rainwater, reduce noise output, and provide a more pleasing view for both passers-by and future residents of the Atlantic Yards/Pacific Park highrises being built around it.

The Architect's Newspaper recently got an exclusive tour of the roof in construction, and the photos give the otherworldly impression of a park floating above the streets of Brooklyn.

The green roof plan was raised from the dead thanks to a joint venture between Forest City Ratner and Greenland Holdings Group, a real estate development company out of Shanghai. A new roof structure had to be built on the existing roof to support the sedum, which is shipped in from Connecticut and hoisted onto the roof by crane. - [Brownstoner]

Brooklyn's Barclays Center just hosted David Byrne's "Contemporary Color" and now the outside of the venue is getting some color of its own -- a green roof -- which should give the rust-colored exterior more of a woodlands feel. That should be a nice selling point for real estate agents looking to move the first condos on the market at Pacific Park Brooklyn, the $4.9 billion project formerly known as The Atlantic Yards.

In other news, Barclays is getting ready for hockey -- the venue will host the Islanders starting this fall, after the team's 43 years at Nassau Coliseum. The first game will be October 9.

Barclays also recently hosted a couple New York legends: Bette Midler, as well as her former piano man (and Williamsburg native), Barry Manilow. Were you there?