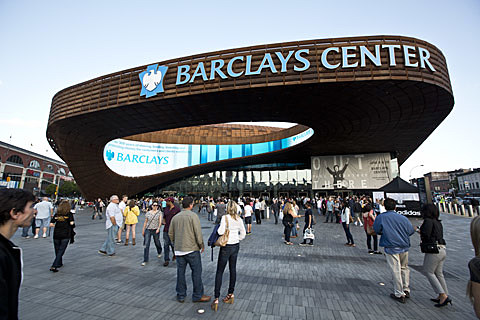 Barclays Center, the arena in Brooklyn that has challenged Madison Square Garden in the New York City market, sold more tickets than any other arena in the United States for the first six months of the year, and led the country in gross ticket sales for concerts and family shows as well, according to tallies published this week in Billboard and Pollstar magazines.

The numbers were a remarkable showing for the rust-colored arena on Atlantic Avenue, which opened in late September last year with a string of concerts by Jay Z. Overall, Barclays ranked No. 2 worldwide in ticket sales with $46.9 million, second to the O2 Arena in London, with $119 million, Billboard reported. Madison Square Garden was fourth with $39 million. [NY Times]

Raise their numbers even highter by buying even more tickets at Ticketmaster. Cirque do Soleil is there through Sunday, and then comes Bieber followed by Beyonce. The Yeah Yeah Yeahs play there in September.