Picture from the scene of the bus crash (via) 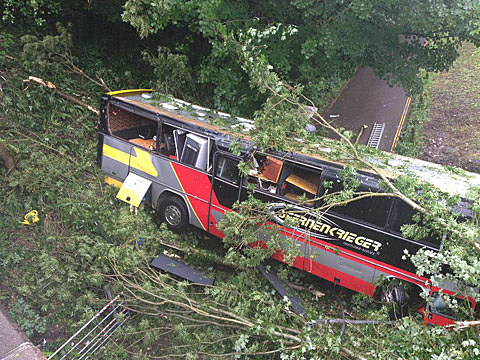 Two people were trapped after the coach they were travelling in fell 30ft (10m) from a viaduct near Bath.

Emergency services were called to Brassknocker Hill, in Monkton Combe, on the B3108 at its junction with the A36 Warminster Road.

An Avon and Somerset Police spokesman said the incident involved a coach which had left the road with approximately nine passengers on board.

The fire service said both of the trapped victims had now been released by firefighters.

"Those people are now being treated by ambulance staff," a spokesman said

"There were seven other passengers on board the coach, who have also been receiving medical treatment." -[BBC]

The BBC is reporting that Baroness was involved in the above crash. So far additional details are sketchy, but all on board have been accounted for. As more details arise, we'll keep you informed.

Baroness have been involved in a motor coach accident in the Bath area of England.
All band members and personnel on board are currently receiving medical treatment.
The band had performed in Bristol last night and were traveling to Southampton for a performance at Talking Heads this evening.
All remaining dates on the band's European tour have been canceled. Additional details to come as more information is available.

No word on how this may affect their US dates; Baroness is scheduled to play House of Vans on August 29 with Turbonegro, Doomriders and Nightbirds.