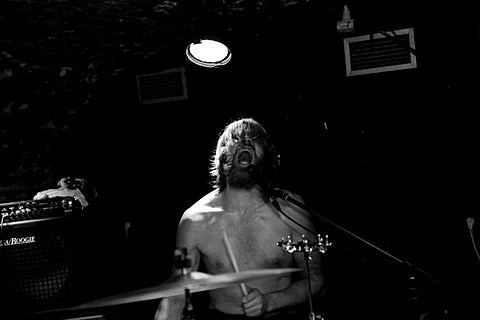 Last year, Norwegian hardcore band Barren Womb released the album The Sun's Not Yellow, It's Chicken. Here's what we said about it:

They've been described as a blend of "hardcore punk with elements of black metal, rock 'n' roll, and country" which should be a familiar description to Kvelertak fans, but the bands don't sound alike as much as they take similar approaches (a big difference is Barren Womb sings in English). Sure, Barren Womb are a hardcore band through and through, and one that couldn't have existed til at least the '80s, but like Kvelertak, many of their influences are as classic as classic rock gets.

Its followup will be a split with Connecticut's Grizzlor, which comes out on March 17 via Riotous Outburst Records (pre-order). You can check out a teaser video for that, and stream Barren Womb's 2014 LP in full, below.

Barren Womb and Grizzlor will also head out on together in Grizzlor's home country after the release. It's Barren Womb's first-ever US tour and ends in NYC on April 4 at The Studio at Webster Hall. Tickets for that show are on sale now. All dates are listed below.

Barren Womb - The Sun's Not Yellow, It's Chicken