King of the unibrow, Wally Moon. Your move, Anthony Davis 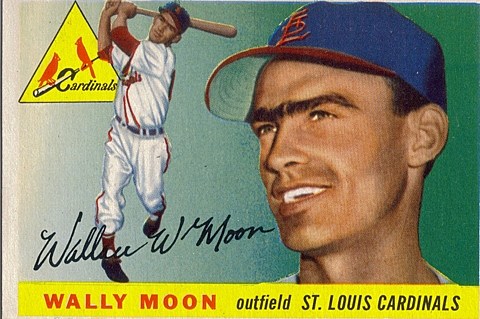 MLB's All-Star Game -- henceforth known as the Derek Jeter Invitational -- is in the rearview mirror and divisional battles are heating up. So, even if you're in Anthony Rendon's camp and can't stomach America's pastime, know that it's an exciting time for fans. Some fans. Jack White isn't exactly thrilled to be catching the Cubs. But, hey, suffering through a (mercifully demoted) Mike Olt plate appearance will do that to a human. At least Eddie Vedder looked chipper. Hopefully he'll be in good spirits again when he sings "Take Me Out to the Ball Game" at tonight's (7/24) Cubs-Padres game.

Of course, those two aren't the only ones with a baseball jones. The supergroup The Baseball Project, featuring members of The Dream Syndicate and R.E.M., are in the middle of their tour which hit New Windsor, NY's Storm King and Hudson, NY's Club Helsinki earlier this week. The tour (check out all dates listed below) brings them to NYC on August 2 at Rough Trade, and to Rochester for a free show with Lucero even sooner. They'll also be playing the home of the Hall of Fame, Cooperstown, New York, the day before Brooklyn on August 1. That particular date should've set up a heck of a weekend in Cooperstown, with Paul Simon headlining the Hall of Fame Gala on August 2. Unfortunately, you're out of luck, as the gala has been canceled. Cliff Lee supplies the appropriate reaction for that one.

If you're looking for some baseball-themed tunes with more heft, Puig Destroyer grinds out blasts with the wild spirit of their namesake, Dodger lightning rod Yasiel Puig. The band -- which is something of a supergroup, counting members of Curl Up and Die, Kowloon Walled City and Thrice within the lineup -- made the Heavy Lowdown DL last week after their drummer caught a fastball to the face. Uh, ow. You can check out their 2013 release Wait for Spring below.

In related quick hits, Modern Baseball (nothing to actually do with baseball) will be touring again in September. Their run with Beach Slang hits Brooklyn Night Bazaar on September 5 with Chumped, and Crow Bait (free). And, finally, a minor league team in South Carolina decided to reprise Disco Demolition Night -- because the first one worked out so well -- with Justin Bieber and Miley Cyrus albums and knickknacks. This one was dubbed Disco Demolition 2: You Better Belieb It and there's video below if you want two more minutes to regret when you're laid out on your death bed. (No word if Rivers Cuomo made it there.) Old Hoss Radbourn is probably not amused.

Streams from the Baseball Project (and their tour dates), Puig Destroyer, and Modern Baseball, and the Disco Demolition video, appear below...