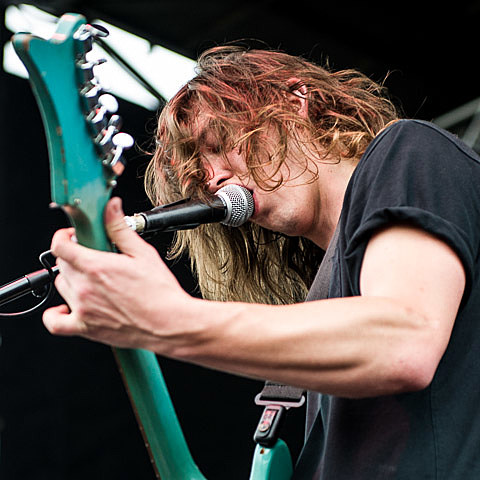 Garage rock duo Bass Drum of Death (who are a trio live) are wrapping up a tour with Black Rebel Motorcycle Club in DC tonight (5/6) that brought both bands to Austin Psych Fest and NYC for a Terminal 5 show this past Saturday (5/4). BDOD also played their own show that night in a more DIY venue, Death by Audio. If you missed that show, or just can't get enough Bass Drum of Death, you're in luck because the band have already announced they'll be returning to Brooklyn in July for two more shows in similar spaces. The first is an all ages show on July 8 at Shea Stadium and the second is a 21+ show on July 9 at Glasslands. Tickets to see them at Shea and at Glasslands are on sale now.

Those shows are about a week after BDOD opens for Unknown Mortal Orchestra at The Space (6/29) in CT (tickets). And that CT show is one day after UMO play a free NYC show at Pier 17 at South Street Seaport (6/28).

We also just mentioned that BDOD are featured on Adult Swim's free Garage Swim compilation with a bunch of other like-minded bands like Thee Oh Sees, King Tuff & Gap Dream, Mikal Cronin, and more. You can stream their contribution, "Dregs," along with a list of all upcoming dates, below...