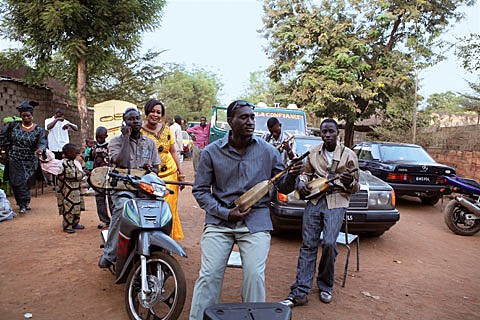 Malian musician Bassekou Kouyate is a master of the ngoni, a small stringed instrument that's something of a cross between a lute, a mandolin and a banjo....[in March] he brought his band and their joyous sound to Troy in support of his new album, "I Speak Fula," and it was heavenly. In addition to Kouyate, the band featured his wife Amy Sacko on vocals, two percussionists and three other musicians playing ngonis of varying sizes.

The lyrics were in a foreign language, but there was nothing foreign about the almighty groove that the band laid down. With microphone pick-ups attached to their instruments with electrical tape, the band simply rocked the house.

One song sounded like a second cousin to Appalachian mountain bluegrass. Still another was spiced with Spanish flamenco and Middle Eastern motifs. But mostly, the 100-minute performance was steeped in the blues. African blues, to be sure, but also obviously related to the blues of Taj Mahal, B.B. King and even Jimi Hendrix. And when Kouyate leaned in to use his wah-wah footpedal, it was easy to draw a direct line from his Malian blues to the Grateful Dead. [Nippertown]

Kouyate's, I Speak Fula, which you can get a track from above, came out in late 2009 and was the first release on Sub Pop's Next Ambiance imprint...

Founded by Jon Kertzer, the host of KEXP's "The Best Ambiance" radio show, a long-running weekly program that focuses on both pop and traditional music from the African continent, Next Ambiance continues the musical exploration, with an emphasis on mind-blowing and life-changing artists with no particular regional or cultural bias.

"I've listened and learned so much from Jon's show ("The Best Ambiance") for half of my life. It just seemed natural to put his knowledge, resources and remarkable taste to further use. It'll certainly be a boon to listeners everywhere," commented Sub Pop Records co-founder, Jonathan Poneman. "Our first release with Bassekou Kouyate and his incredible band Ngoni ba from Mali in West Africa, is the perfect way to begin this new adventure. Their album I Speak Fula captures this truly original music, like nothing you have heard before."

Other upcoming shows include free gigs in L.A. and Chicago. Videos and all tour dates are below...