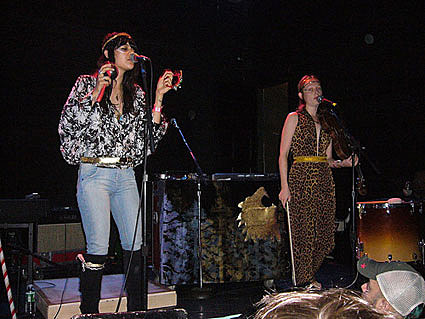 I wasn't totally sold on Bat For Lashes before the Bowery show, and I basically feel the same way after seeing them (or "her" as many people refer to them). Natasha Khan is very talented....

NATASHA Khan, the 27-year-old Brit who is Bat for Lashes, has been compared to PJ Harvey, Siouxsie Sioux, Kate Bush and Bjork. Bjork herself has offered effusive praise for Khan; so have Thom Yorke and Devendra Banhart. [The Age]

...., but much of the show left me a little bored. At least one song was clearly a hit, a bunch of others were great, but then there were some that had me daydreaming. The mixed - not your typical "indie" - crowd seemed mostly into the show though - applauding loudly, and my companion even loved it. Maybe I'm just a grump.

She (they) played one cover. At the time I didn't realize it must have been her famous cover of Bruce Springsteen's "Im on Fire". (was it?)