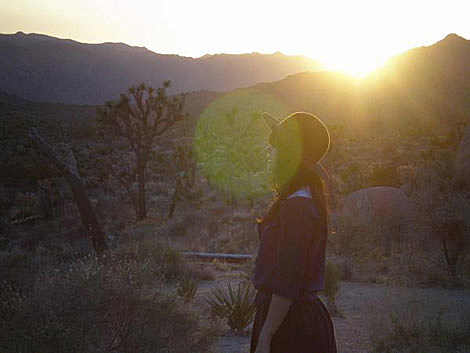 ...Co-produced by Natasha and Dave Kosten, with whom she worked on Fur and Gold, Two Suns further enhances this idea of dualities in its music, mixing autoharps with intense electronics, complex drum rhythms with lush keyboards and strings. The album features guest turns from the legendary Scott Walker (on album closer "The Big Sleep"), Brooklyn psychrockers Yeasayer, and her own band The Blue Dreams (who toured with her this summer) on several tracks, but Khan herself worked the majority of the musical magic, playing pianos, synths, guitar, bass, drums, beat programming and more. And then, of course, there's Natasha's illuminating voice as the core of every song, sounding bolder, fuller and more impressive than ever before.

The whole North American tour hasn't been announced yet, but tickets go on Am Ex presale today at noon for an April 30th show at Bowery Ballroom, and for one May 2nd at Music Hall of Williamsburg. Tickets on regular sale Friday. May 1st is in Philly (tickets currently on sale). All dates below...