Bat For Lashes @ MHOW in May (absolutelyaudrey) 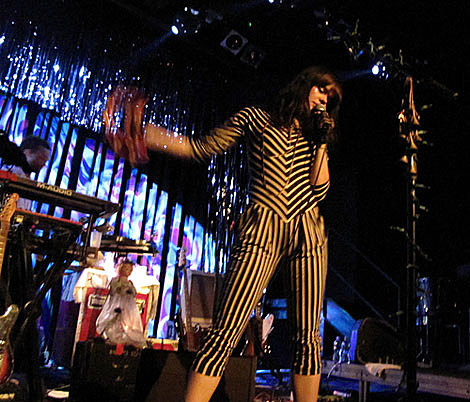 Anyone with prior reservations about Bat For Lashes' ability to command a stage the size of Primavera's Estrella Damm are fools. That much is clear from opener 'Glass'' first chiming chorus; not only is her delivery spot on but she looks like she's well and truly at home up there, stalking the stage and delivering her ethereal set with the sort of gusto a first album Natasha Khan might have baulked at. She's grown as a performer and a songwriter since then, that much is clear, and whether the slightly more electronic direction of second album Two Suns is one that strikes a chord with you or not, the pop brilliance of a song like 'Daniel' is practically irrefutable. And, let's face it, a set filled with 'Sarah's and 'Prescilla's probably isn't quite what a beer-filled festival crowd is looking for. A canny move, then, and one that our ears are left thankful for this evening. And is that Charlotte Hatherley up there with her? Why, yes. Bonus. [Drowned in Sound]

Bat For Lashes have announced a North American tour around their previously scheduled visit to Chicago for Lollapalooza in August. That trek includes an August 12th show at NYC's Webster Hall. Tickets for that show go on AxEx presale sale at noon, and regular sale on Friday. The tour also includes a stop at San Francisco's Outside Lands. All dates below...