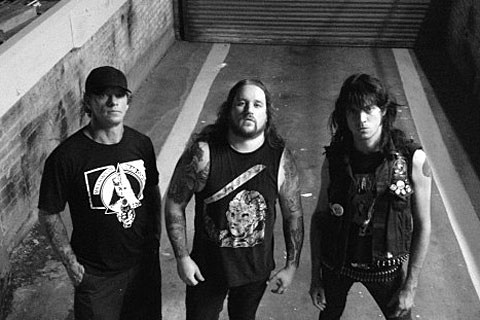 Bat, the speed metal super-sideproject from members/ex-members of Municipal Waste, DRI, and Volture, are hitting the road in late August for a short run of Eastern dates. Says Ryan Waste, "After an insane response from our first gigs with Satan and the Tankcrimes Brainsqueeze Fest, we have been itching to hit the road for real." Bat will bring along Chainbreaker on the tour. The two will stop into the Acheron on August 22, along with Iron Force. Tickets are available now.

Bat released a demo in 2013, Primitive Age, that created a buzz, bringing together retro NWOBHM flavors like Venom and Aragorn. Toronto's Chainbreaker, featuring members of Cauldron, released the Constant Graving EP in January, mining much the same territory. Both releases are available for 'name your price' on their respective Bandcamps.

All of the dates are listed, along with streams from Bat and Chainbreaker, below.